Summary: Regard the vast field of possibility that lay before you. What has been may be behind you now, and with no regrets. What you have before you, at least in cryptic modulations, has your attention rapt. Pay attention to what meets your eyes when you raise them, all the while being ready to receive what a free and clear consciousness brings your way. The bubble of truth is pierced now, and time hangs as if suspended amid realities. In the space between, light grows, love lives. Discover this as you turn toward your inner arbiter of things that are destined to be. The moment is coming to shine in the presence of love in free flow. The one you have waited for is waiting for you within.

Ten of Cups — Ace of Swords (reversed) — Two of Cups 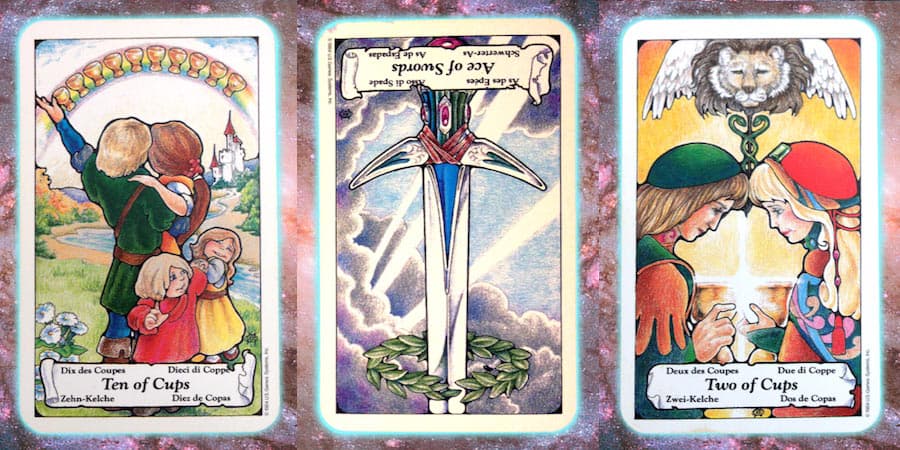 The bubble of truth is pierced; time hangs suspended amid realities. In the space between, light grows. Turn to the inner arbiter of things destined to be. #pleiadian #divinity #transformation #worldchange Click To Tweet

Have you noticed how sparkling the atmosphere has become? Not just with the clarity of being allowed to breathe, itself, but in the almost electric sizzle of energy that’s being given space to move into. It’s as if the pause that echoes around the world right now is allowing the planet itself to breathe a sigh of relief. It’s part of a process of regeneration of the human spirit, and it begins within the planet itself. The sentient form of Earth speaks to you through a heightened sensibility. Your own latent ability to grasp the intelligence of this moment has the opening needed to break free and paint a picture in the sky for you. What do you take in from this moment of suspension within the zero-point of transformation? What has come before has no bearing on the road ahead of you. Everything is yours to define, to color, to design. The palette is yours, and the sky’s the limit. Time is a blank canvas for your creative vision to fill. What will you do, now that you have nothing in your hands but that which is yours, natively, by tribe and vibration, gathered or gathering? Perhaps it isn’t a cohesive idea yet. Simply be in this moment of no-time, collect the extensions of love that surround you, even if they seem far away, even if they are as yet out of sight or not yet fully developed. The promise that this moment holds opens before you is an invitation to trust what’s flowing into your field of intuitional view. The reality will follow. For now, welcome the conscious current that’s finding you, amid the field of change.

There’s no secret anymore, when you gather with your guides. Perhaps there’s some definition yet to fill in, but the certainty that fate has cast its word cannot be denied. You can feel in your bones that this is a moment to pay attention to. Do, because what’s speaking to you from deep within yourself is nothing short of a new direction for your life. Perhaps things will slide back into normalcy for you, after the uproar has settled. That well may be, but at the core, what is happening now portends a massive shift in how you take in and process information, how you relate to yourself within the context of your reality, your environment of mind. Self-awareness has pierced the membrane of how you live your life. If it’s torn everything that delineates what that means for you, do you cease to be? You are not who you used to be, yet you carry the core essence of yourself with you through every evolutionary step of your journey. Now, you have a powerful moment to witness, as all that has been the orb of your life peels away, like the membrane of a bubble when it pops. With knowledge comes freedom, and responsibility to carry forward what has been received. You are here, now. Initiation is a process, yet it comes to be in an instant. Move through this time of no-time with the awareness of one seeing things for the first time, with new eyes. Allow truth to drive its point home, and be willing to release what’s been for all intents and purposes, a comfortable, if delicate, shell.

MOST OMWARD DIRECTION: Two of Cups

It may well be that you’ve been in a state of separation for longer than you’ve realized. Such a realization can be brought into focus as the space between is allowed expansion. Light finds its way through the cracks and crevices that form in the natural process of foundational movement. Being torqued out of position brings new alignments to base energy hubs. Release of patterning wrenches what has been from one set of impulses to another. When that patterning has been enforced from outside the innate will, and when that will has been influenced by artificial drives, desires, and design, how long can it hold before it collapses in upon itself, demolishing utterly the strength of the innate source code? Unless and until it is allowed to break free from those restrictions that hold it in place, it will continue to yield to compression. So has it been that the space where light lives has been under pressure. Do you believe in this light? It is as alive as is love, and as precious as life held in your hands. You hold this in nascent form now. Allow this space to arrange itself, to settle, for external patterning to shift into nature’s encoded state. You will witness what love can do, and what light is capable of when given its rightful context. How this happens will be seen as you turn toward that which has been held in abeyance. Grant yourself an audience with that holy one which dwells within. The bearer of love’s precious gift, amid whatever else is happening, is none other than yourself.

“For more centuries than you may realize, a diligent program has been followed by humans with an understanding of how Eight works but no regard for Nine. Not that we mind that, but love eventually creates an opening in even the densest of darkness and a whorl of light spins into the dross. At that point, dark density begins to lose its infernal normalizing processes of consumption, aggrandizement and evolutionary sequencing of data. Grating squeals of brother tearing apart brother can be heard as formulaic space- and time-based reality begins its inevitable slide into the saner pattern of processes of nature, knowledge, and number.'”