I drew a card on Monday to go further along the path carved out by last week’s message. It’s the Tower card, reversed; you can read about that here. It seems to mark a tension point, and we can follow it to release something hidden that we’ve been carrying. The results can be liberating, on many levels.

Scroll down to read about a powerful bodywork technique you can use for release. 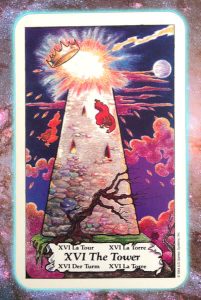 No matter how the Tower appears, it’s not at first glance a card for the faint of heart. There are a few in the traditional tarot deck that are like that: The Devil, Three of Swords, and Death are some that immediately come to mind. If they’re so awful-looking when they’re sitting there staring at you, aren’t they even worse when they’re in reversed position, upside-down? Not necessarily. While it’s perfectly ok to use all the cards turned right-side-up, or even sideways or however you like, I find some richness comes into a reading when the card is reversed. An added dimension of “not quite”, which is always a nice thing to have when things, on the surface, look dire.

The Tower card in its normal upright position denotes a blast of powerful change, earth-shattering transformation, a sudden and abrupt end to things as you know them to be. With that comes some kind of epiphany, but not before belief structures (a favorite term of the Pleiadians) are utterly destroyed and you’re thrown to a very grounded place. Looking at it this way, it’s not so bad. Just a little upsetting, temporarily. 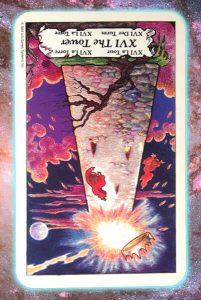 Any reversed card can signal either the negation or contrapositive of the upright meaning. It can also indicate that particular circumstance, energy, or understanding is either departing your sphere of reality, or is on the threshold about to enter. It all depends on the position in relation to the other cards you draw. As the Monday message was all about the reversed Tower, it’s a pretty sure bet we’re talking about not-Tower rather than its comings and goings.

Reversed, the Tower is telling you you may just squeak by a catastrophic change. It can also tell you that hey, you’re afraid of things changing. Are you resisting change? Thus, it’s a friendly tap on the shoulder to help you let go of whatever has you rooted to an outmoded mindset. That’s always a good thing, especially in a world that’s changing as fast as ours is.

I thought about this card while suffering from a very sore neck this week. I felt like it would be really great if someone could shoot some light from their fingertip into the point where I was hurting. The image on the card really stuck with me in the days where I was in pain, almost like a reverse beacon pointing to a place that needed some extra attention.

I had recently decided to stop eating bread, pasta, anything with wheat or gluten. I’ve done this in the past and realized it’s time to do it again. I’m tired of the inflammation and migraines it brings on, as much as I love a good baguette. However, over the weekend, I succumbed and had a sandwich on regular bread, then pasta for dinner. Then I suffered for a few days… stiff neck, headache, general yuckiness. Ok, I thought, I get the message. Time to let go of this stuff for good.

Still, my neck needed release. I knew of several techniques, from my years as a massage therapist, but I couldn’t very well do bodywork on my neck, myself. I explained to my husband one particularly helpful tension release technique that could help. He tried it, and with some guidance, it did the trick. Headache, gone.

Are you resisting change? Letting go of an outmoded mindset is good in a fast-changing world like ours. #pleiadian #ninespath Click To TweetHere’s the way it works:

When you find a tension point, you’ve found a place where the body is holding on to some past trauma… either an injury, a sudden tension from fear, memory of abuse, etc. Experiences can get trapped in the body like an etheric bruise. Even the inflammation from a food allergy has deeper roots than just falling off the gluten wagon.

Rather than trying to obliterate that tension with applied muscle and harsh massage, simply connect with a fingertip. Allow your consciousness to connect with the consciousness of the body in need of help. You’ll feel the connection once you relax and allow. Now, (as my teacher Barry Green famously explained) with the strength of an ant pushing a pebble, let your finger sink into the tissue. Merely the intention is enough. You don’t actually need to push. The ant has no muscles to speak of, but like the song says, he has high hopes, and strong intent.

As you connect more deeply, the tension will by stages release and allow more healing in. When you hit a point of more tension — and this is as important as it is counterintuitive — don’t pull back. Don’t meet the resistance of the muscle to relax by withdrawing, not even a tiny bit. This only disconnects. It disappoints. Opportunity can be lost. There’s treasure just beyond. At this point, Barry would say, move like an ant pushing a brick. With intent, and only intent. Magic happens when you get past that resistance in this way. If it takes time, so be it. Indeed, this does take time, but it’s a sure way to release. The key is to maintain intent. Then back out slowly and with reverence for the transformation you’ve just taken part in.

Don’t be afraid of the pressure point or the tension, but don’t try to strong-arm it, either. Easy does it, really.

The Pleiadians said in Monday’s message, “Any point of resistance signals a spot where you’re unknowingly attached to a lost world.” I’m a firm believer in releasing resistance where it’s been stuck in the body. Have you ever experienced massive personal transformation from getting into those resistance points? Maybe it’s a good time for some bodywork… after all, a new world awaits! Nine is waiting there, too, to reveal something you’ve forgotten, and work the divine integration within.

Barry Green, Ph.D., was my teacher and mentor during the most intensely transformational period of my awakening. His mastery of body-mind integration, body psychology, trauma release and so on have touched many and rippled through countless lives. Through my work with Barry, I dedicated my life to healing. I count myself most fortunate to have studied with this brilliant, warm, and funny man. You can find out more about him and his transformational teachings (and courses) at his website. There, you can download an excellent and insightful slide show to more fully understand the power of release.