Summary: The pace of change is picking up. You can feel the leading edge of a distinct shift in the cosmic weather. It seems that what you’ve been waiting for, whatever it is, is about to hit the scene. However, there’s the very present matter of realizing that you’ve been stuck in a corner and seem to have participated in some kind of ill-conceived plot. As you emerge from behind the dense blanket of ignorance, do so with forgiveness, that you may move into a wider world without the heaviness that had been imposed upon you. The child, long neglected, ill-used, and hungry, awaits the bounty of love’s goodwill, free and clear. Change your cloak of doom for the mantle of benevolent compassion, and give freely of the gift you have in abundance.

The Fool — Five of Cups — Six of Pentacles 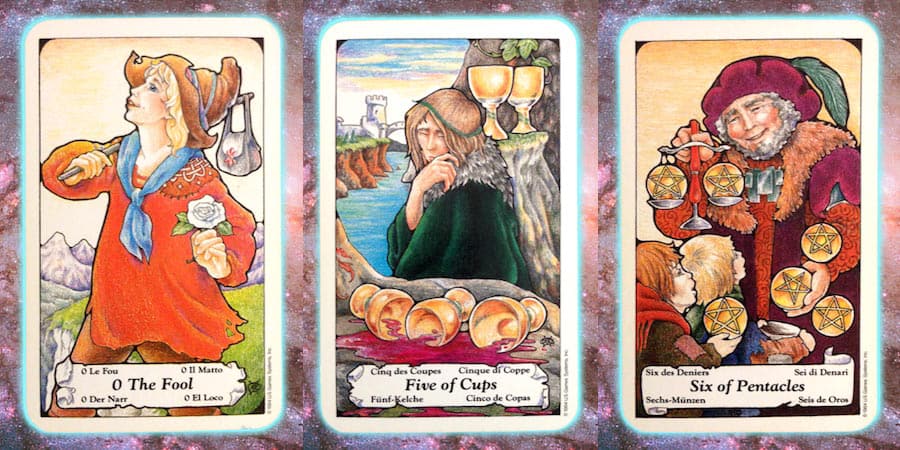 Just as forgiveness frees you from the bondage of another's wrong actions, so moving into magnanimity brings you closer to activating your divine purpose. #pleiadian #divinity #savethechildren Click To Tweet

Are you ready for what’s coming next? This “something new” that you’ve detected in the air has been calling you, drawing you forward in a way that’s refreshing, revitalizing, and wholly unprecedented thus far in your journey. Even though the idea might well have been in the back of your mind for a while, even to the extent that it’s been a hidden part of the landscape all along, suddenly, that’s taken an upturn in energy. You’ve been getting signals that it’s time to turn your face toward a new reflection in the mirror. It’s still you, but it’s a new aspect of you that’s emerging. What do you discern in the lines of the face, the light in the eyes? Can you recognize yourself in this exact moment in time where you tune into the timeless aspect of self? As you do, you can make room for what you have been becoming to emerge. The pace is quickening. There’s no need to hurry, though, for the current is self-regulating and well monitored by those hands that fashion the grand design, be it the divine source of reality’s trope or the soul’s artistic moves. It all comes down to how willing you are to move a little bit beyond where you’ve been. Do you dare take a step past the limits habitually defining your space? The outer world will follow the precedent of the inner; while you sense something is in the offing, get clear in your heart. What’s ahead is so full of color, you won’t need to carry anything of what you’ve had before. It’s already been projected into time’s lens. Just step into it.

Maybe you hadn’t noticed what’s been lost, as you waited for an opening to appear. Tucked into the safety of a culvert, you have only so much room to maneuver, only so much of the vista to take into view. In such a situation as having had to carve out some comfort, the tradeoff has been to inadvertently limit the range of sight. As is usual, reality has followed suit from the inner conditions of spirit and mind. Being enclosed has drawn attention inward, amplifying the condition of being boxed in and drawing attention to where it might otherwise have been distracted from. Now you are becoming aware of just how much has been mishandled. The waste is right there for you to see, the sacrifice made by others in the name of what you had been absently guarding in what you considered to be a benevolent reality. You don’t remember knocking over the precious vessels of life’s sacred potential, do you? Surely, it couldn’t have been you. Look, you can hardly move within the cloak draped around you, heavy and limiting as it is. Take in the scene, for it cannot be disregarded any longer. The teaching that goes with the sin is forgiveness. What’s done is done, but you need not carry the burden of the deed any longer. The cloak of great weight is not yours. It’s time to reach with your free hand to remove it, for not all is lost and yet you have precious life to bring to that home that waits your arrival. Mourn, but prepare to move out of the dark culvert into the wider world, wiser and aware.

MOST OMWARD DIRECTION: Six of Pentacles

Hungry hands are waiting for new bread. Soon the pallor of fear and hopelessness will be met with the light of the sun cleared of dark clouds. With the flow of light free from an overgrowth of obstacles comes a torrent of joy, communication, and benevolent good will. The essential spark of humanity, both in the individual state and the world at large, has for too long had its joy stolen, scuttled from view and hidden in a state of material and spiritual impoverishment. Those who have been confined, unknown, ignored, will find the world a better place than they could have believed. When at last the bonds of enslavement are broken, humanity will know what to do. Outside of the walls that hold the spirit captive is benevolence waiting to bring joy back into balance. Even those in the most wretched state will find hope, and more, the means to freedom and a future. The time is coming for the child in captivity to be set free. Will you be willing to step into the role of benefactor, when faced with a scene of such poignancy? Just as forgiveness frees you from the bondage of another’s wrong actions, so moving into the place of magnanimity brings you closer to activating your divine purpose. If you are enticed by the concept of acting as a tangible hand of divine love, be ready to give what you have to feed the hunger too long forsaken. People are ready for nourishment of the kind that comes from the spirit of truth. You’re asked to move into your bigger self. Watch the joy multiply!

“And what of the children? Must they be sacrificed to cruelty realized? Harm to them is like sorrow greater than God can comfort. Could you handle the sorrow of ogres keeping children in captivity, waiting to feed on them? Nemesis has created such a scenario in the dark underworld of your reality, generally making them prisoners of desolation. Why? How can a loving god permit such a reality to be?”