Summary: A sudden blast of light may well rock the foundations of a carefully constructed sanctuary. If so, it is because the foundations were not really “real”, and the time has come to be done with an ambitious but misguided delusion. While you start the week with a hopeful outlook, you may soon be aware that the level playing field has just shifted into a higher pitch. The truth, it seems, is revealing itself from granular to massive scale, leaving you with the need to find inner balance between opposing opinions. Rather than get overwhelmed in the aftermath, turn your focus toward what your inner state reveals. Consciousness is rising all the while.

Six of Cups — The Tower — Two of Swords (reversed) 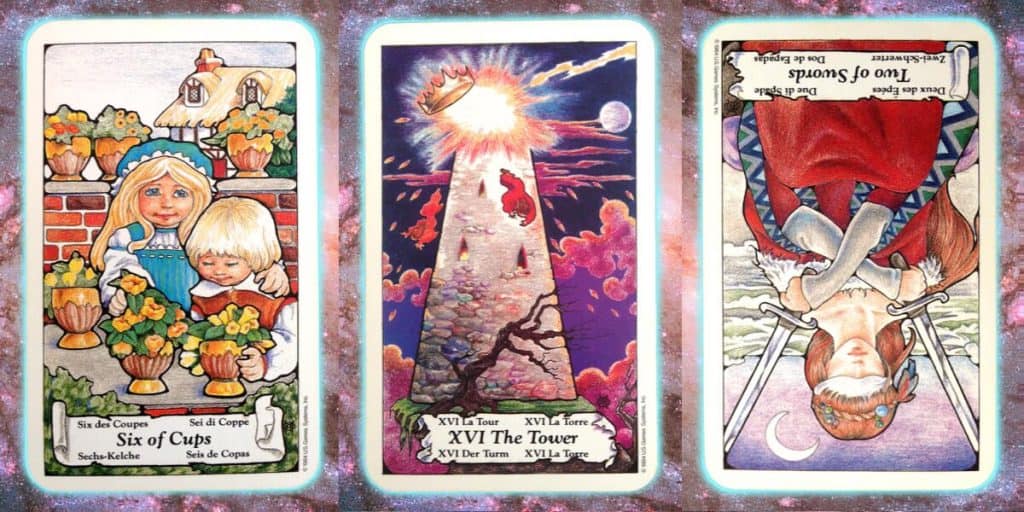 A sudden release of truth blows the lid off of a carefully crafted secret... first the hiding-place has to be destroyed. #pleiadian #tarot #nine Click To Tweet


Have you achieved a sense of composure since orienting yourself closer to your hopes and dreams? Have you created a comfort zone where you can feel it’s okay to extend a little bit of compassion to those who may be lost and found? At this point, there has been a separation from what has housed the framework of all you have known to be true. However, if you’re tending the garden, you may not be aware of another wall rising in the background. If you turn to look at where you’ve called home, you might be surprised — maybe distressed — to see there’s a new structure rising in between. It seems to be formed from bits and pieces that seem pretty solid, and which fit together if not completely at the same intensity of dark and light, at least in a cohesive array. For the moment, enjoy the feeling of unity you find with those of like mind and common aim. But be aware that there is something working behind the scenes to raise the level of what you’ve been putting your efforts into creating, moving the living essence of it closer to the light. You carry the memory of home within you always, for it has shaped, to some extent, who you have become. Be steady in your love of your path, but be aware as well that things are leveling up. Don’t let what is building cast a shadow on your outlook. Rise with it.


An air of expectancy haunts the skies. In your bones, you feel the immanence of change. What has been cast in stone will not withstand the forces of light blasting through the darkness now, for its walls are built on an imaginary field disconnected from the rest of reality. In fact, so disconnected is the foundation of the edifice dedicated to belief in things one way that it has wandered into an environment of murky, twisted magic. All that is set to change, and you with it. Be prepared for sudden revelations to rock the foundations of your world, to cast from their high places those who have overseen the construction of exclusionary ambitions too extreme to be tolerated by sovereign Nature. The defenses of the inner sanctum, hidden from view, are under siege; a sudden release of truth blows the lid off of a carefully crafted secret. Soon, what you know will be known more widely, but first the hiding-place has to be destroyed. Masks must fall. That which has been hidden must be released. It cannot withstand the light that comes.


It may seem in the days to come that you are holding completely oppositional points of view simultaneously. Where you had a firm grip on what you knew as true is suddenly counterbalanced by its nemesis. Well-meaning people may be deluging you with help to make up your mind about things, leaving you overwhelmed and capsized. Now’s the time to turn your attention to understanding how your mind works. Which way will you lean? Who can help you decide? Right now, only you can work through what your mind is confronted with. It’s up to you to learn to trust your ever-present intuition and come to grips with the validity of the thoughts you hold. The time just ahead is marked by a need for discernment, not action. Work through what’s presented and let your heart feel your experience without interfering in it. Learn to trust your own ability to think for yourself. If you are in a position to give information to others who are working on finding balance, be aware and be delicate. The rising tide of consciousness will soon tell all. Work through concepts, and avoid getting caught in emotional hype. Protect your heart while at the same time being open to what it has to reveal within.

“Here is one thing for you to be aware of, in coming into fuller cognition of who you are and have been: You are not the slaves you have been trained to believe you are. You are not weak and servile unless you choose to be, in order to fit into the structure of belief you carry on your back like the twisted shell of a snail. You have the power to cast off the encumbrance of artificial intent, whether that be implanted from outside forces or home-grown within the limitation of self-imposed belief.”