Summary: Secrets revealing themselves now are going to have an effect on how you see and what you experience. A period of adjustment as a new wave of consciousness brings emotion and awareness leads to a time of dealing with the things revealed. What had been neatly organized now spills forth in an undeniable mess, but that need not give rise to despair. On the contrary, remembering the comfort of the heart’s velvet warmth will give you the moment you need to gather your composure. What had been kept from turmoil is yet in your possession; the secrets of your inner knowing remain unsullied, touched by emergent light of a day of great promise. Rest now, and know that the day is coming for the unseating of an authoritative structure of belief. It is well to keep your mind turned to the inner reality of truth, avoiding the bloodbath of general background scenes playing out the drama of loss and insurrection. You are removed from the turmoil, as the keys to understanding are coming back to your hands. What had dictated blind faith now makes way for your own access to the secrets of power and sovereignty. 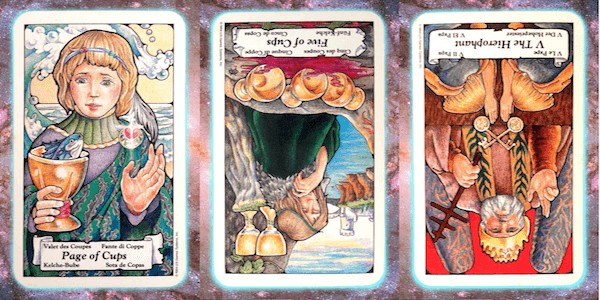 
This week’s reading finds us in possession of a new set of circumstances that comes as somewhat of a surprise. What secrets have revealed themselves to you? In the bigger picture, something is amiss, something new and unrecognizable has popped its head into your otherwise reasonable reality. Well, in fact, you’ve been doing the best you can to keep your reality stable and reasonable, but for some time you may have had the feeling that the curtain has slipped off the rafters. Now, you find yourself regarding a revelation you hadn’t expected in quite the way it is appearing to you. However, there’s no mistaking it for misguided thoughts or otherwise the result of the machinery of mind. This is purely the thing your heart has been trying to get you to see, and has taken great lengths to make sure you get it now. In the emotional maelstrom that follows a massive adjustment in how you see things, a new wave of consciousness is set to break. You already feel it building and you know there’s no stopping what’s coming. Perhaps it’s best to listen now to what you hear your intuition telling you. It may make you blush, it may shock you, but it holds the secret of staying on stable ground while the rest of reality rocks and rolls. These secrets revealed come from the very depths of what has been known. As you pay attention, you may notice a flash of insight comes within reach. Do you feel yourself intuitively moving toward it?


What do you feel right now as you look at the state of affairs in front of you? Certainly something has been spilled; that cannot be denied. All that has been kept in segregated containers now mingles and shows its color as one and the same. Secrets are no longer kept, and that may give you some cause to succumb to despair. Do you? What does the core of your being tell you about the things that you can no longer keep yourself from seeing? What has your heart finally given you as something to shy away from the magnitude of? Certainly the emptied vessels seem to take center stage now, but the time has come for them to rise without the weight of what they had carried… and to lift themselves from weighing you down. You still have the true measure of balance; that which has survived the display of emotional carnage remains true and pure. Remember as you rest in the safe place of your being: The thing to let go of is already releasing you. Let it be that the truth has revealed itself from taking the risk of feeling the loss. Where your heart’s treasure lies is burnished in new light. Give yourself time to deal with whatever upset visits you and rest knowing that it’s just a temporary shift in your direct interaction with reality. A new awareness, more clear, is rising now. Promises broken cannot long withstand the rise of this new light of understanding. Promises manifesting in the background will soon come to your attention, ready for when you open your eyes.

MOST OMWARD DIRECTION: The Hierophant (reversed)


Who holds the keys? Certainly, for a long time, the secrets of power and glory have been held by those in the seat of sovereign estate. Perhaps you have held the keys at bay by entrusting them to authority above your own. Perhaps you have relegated them to an edifice of belief to which you had held your own authority in subservience. The appearance of a figure such as The Hierophant marks a point of significance; it may be that his reversal signals the end of his position of overarching mass. In the aftermath of having himself unseated, the keys are right and ready to be known. An old way of sovereignty lets go of its position above the people and above the mind. In your own situation, he beckons you to look at a heavy role that had been burdening you with the limitation of being blind, of remaining in ignorance. The secrets carved on the towers of power are beginning to brilliantly show their blood. The double-cross has been crossed again and will bring to balance that which had given an overload of blind trust. When the keys are in your possession, perhaps in the span of the next two weeks, the time will have come for you to raise your head. For now, though, there is no need to indulge your eyes in the blood-red signal of the end of a way of belief. In the days and weeks to come, find your anchor in a higher way of inner connection and know that the keys are yours. Trust the inner knowing; it is the higher way to know.