Summary: Get peaceful in your mind right now. This is the moment where you are at your most powerful potential, so give what’s going in inwardly your full attention. It will serve you well in the role you are given. As the carrier of a bold and brilliant truth, you have earned your right to speak. However, the world is not yet ready for such clarity. While the opening has been made to dispel the dark illusion that has blanketed the reality in which you move, still the gloom remains. Something’s building, after the initial breaking of the outer shell. You are carrying the essence of that light yet blocked. It is well to take a look at what it is that you’re best made to understand, and hold off on unleashing the full whack of what’s on your mind. There’s still something to learn. 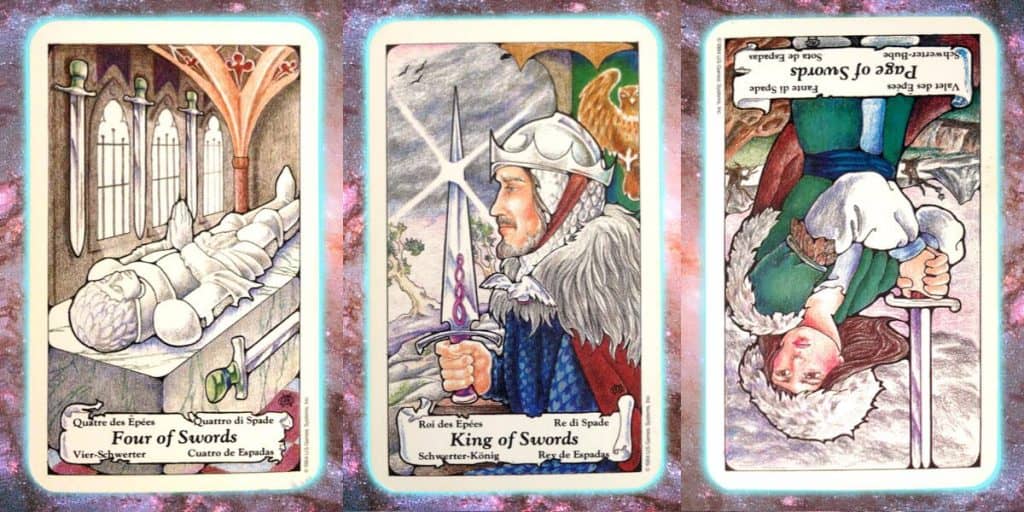 Remember where you came from, because it has not been such a long time since you have been in the position of seeking and ignorance, yourself. #pleiadian #tarot #nine Click To Tweet


Remember what you wanted to create, from nothing, from the idea of something. Tune into the remembrance, and pull your energies into your central point of divine connection. You have that, you know. You have been given downloads of insight that have pried open the dark walls of your mind, and the extradimensional love of something you cannot quite grasp but which bolsters your journey. All of this has been given, and now you are made to remain silent. As if some web, some cocoon has wrapped around you, giving you the semblance of who you have known yourself to be, you are made to go into the place of silent repose. Strangely, despite the solidity of discipline this moment implies upon your awareness of self, you find yourself comfortable, able to find balance. Everything you’ve been through, all of the mental gymnastics you’ve been asked to perform, have indeed contributed to the greater cause to which you are sworn. Now, you need to take a break, and come into alignment with the way of thinking that is part of the essential thing you have been working to understand, and bring clarity into being.


Right now, you’re very clear about what you have been given to understand. No one can predict the subtleties of a spiritual awakening, and no manner of preparation can give you the edge you need to get into a position of absolute clarity when it comes to a gift of understanding from a higher source, from the mastery of mind that can result from grappling with a new envisioning of the reality around you. Take  a moment to look back, and honor where you have come from. See that you are where you are — at a point of power — precisely because you have been given an insight that has broken the shroud of greyness around the reality you have been existing within. Now, you have the insight yourself, you have brought your understanding to a sharp point and are ready to use your empowered point of clarity to liberate and to enlighten. Remember where you came from, because it has not been such a long time since you have been in the position of seeking and ignorance, yourself. Sudden blasts of light can do much to ennoble the human character. Carry this with you now, and realize what it is that you carry.


How hard is it to hold your tongue, right now? There are dozens of things you could say, a million things you could point out, that would dispel the ignorance you see all around you. However, to cut loose right now, and in the days to come, would probably do more harm than good. Your energies of inspired knowingness might come across as knowing-it-all-ness, especially for those newly come ’round to similar ways of seeing things. These are days of awakening, and you are advised to let those around you find their way without getting in the way. While you have something very important to communicate, it might be wise to step back and think about the impact of your words and actions right now. Get a little more grounded before you start giving voice to what’s on your mind. This way, you will ensure the maturity of your ideation as it hits other people’s minds. This is a time of great turbulence, under the current of outside arguments and fly-by-night enterprises of mind games. Let things settle. What you are bearing is worth cultivating a bit longer. See that the levee has broken and the floodgates of understanding are about to be released onto the scene. Until then, stay with your inner truth, and try to gain an understanding of what it is that’s being needed to know.

“You want to do something and yet you want to do the oppo­site. The aspect of yourself which wants to act in opposition is the aspect which has larger belief patterns than the aspect which wants to act in a certain way. As you claim your beliefs about the one, you must examine your beliefs about the other. A clarity arises. That clarity is the result of laying one system of belief on top of an oppositional system.”