Summary: In turmoil and sudden fury, the tower falls. The beginning of the end has arrived and the rats are flying from the high dungeons of darkness. Under this full moon, a blast of awareness dislodges the final vestiges of a bloody ritual of secrecy and ambition, as well as the brilliance of a segregated sovereignty now released. Turmoil spills into the realm of probability, as the balance of power shifts from unidirectional offense to multifaceted defense of light. Now is a time to hold your space, speak your truth, look with a steady gaze, and stay connected to the source of light. The edifice of shadows is losing ground; it is only a moment before it falls utterly. Stay inner-focused while the last of the barbs fall impotent and abandoned. Don’t let yourself get caught in them. Feel how the wind has shifted.

The Tower — Five of Rods — Eight of Swords 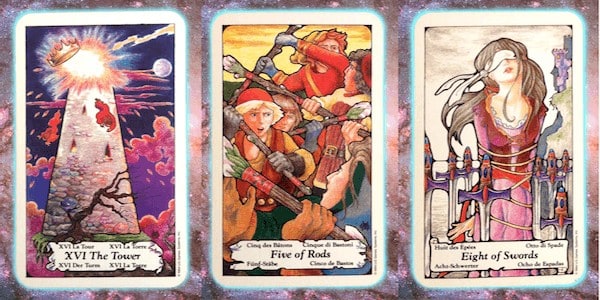 
Dislodged in turmoil from the seat of power, as we saw in last week’s cards, the ones in power are falling from grace and place. In the light of a full moon, the Tower is falling, cracked, demolished, losing ground and support for its continued survival. What has happened is like a blast of illumination, sudden and unmistakable. Where once the crown was kept in high places, it is now seen by all. Will it be owned by all? Certainly there are those who are being cast away from its golden shine. In the dead of night are deeds done to ensure the eviction of the high priests of discord. What does the Tower represent in your now-moment? What has been part of the landscape that is undergoing radical renovation? Breaking apart something that had been familiar may also bring awareness of its strangeness. You may realize that something you had taken for granted as part of the scenery really has no natural place. Look at the nature around it. Is it straight and thriving or gnarled and impotent? No time left for compromise or bargaining, the hand of God has given a bolt of light to clarify the situation. Demons fly from the light like sparks from the welder’s torch. Blinding though the revelations may be, as the tower cracks open to reveal its inner secrets, the truth will make itself known, beginning now. To whom does the crown belong? Long kept from the kingdom, it sits on no man’s head. Could it be that it belongs to you? Remember the lesson of the tower, and let the crown rest on the head of humanity. Acknowledge your own sovereignty. Own your crown of light.


Now the blood boils and the compass becomes confused. Outpourings of insight give rise to instinctive action. Finally, the words are spoken, the sight is seen. What arises is rooted in the drive for empowerment… a natural desire to be. In the conflict that takes center stage in the corridors of understanding now, lower-sourcing energies wage what offensive maneuvers they can. Backs against the wall, these players are outnumbered by the higher-sourced energies. Remember where you are engaging with power now and wield it with zen-like clarity. Merely holding your ground in truth is enough to gain you some space amid turmoil. Given that this is the moment that fate has woven into the fabric of human experience, it is not alone that you face the moment. Allies arise and light floods the background. You already understand what is coming to be, and you are ready to fight to defend what is coming to be. You will not back down in the face of a last-ditch assault. What you are gaining in strength has the potential, and the potentiation, to drive down any who might assail with words or division. While that lunges forth, it also falls. Be aware that what you see center-stage is the work of hands losing their grip on what has been a source of energy and direction. The defense of light will require a multi-pronged approach. It takes the multitude of perspectives to bring an end to a stalemate. Settle into your space and lodge your trust in the light breaking on the horizon.

MOST OMWARD DIRECTION: Eight of Swords


Last week began an extended period of moving through a time of turmoil and drastic change. The way to get on the other side in grace, we saw, was to keep your head out of the overwhelm and stay connected to the inner-knowing path to divinity. The keys in their descent are just out of sight now, but the inner knowing will guide them to your hand. This week, again, remember it isn’t necessary to take in every detail of the turmoil that’s a-rising. While yet you may feel unable to move forward, a wave of fresh air is coming from the future. While you wait for the remnants of abandoned armaments of lost minds to finally sink into dissolution, be still, be steady. Some of what you might see is not meant to be seen, at the risk of adding to the turmoil already breaking down the walls of the ancient edifice of hidden secrets. There is nothing so dark behind the closed eyes of one about to awaken to freedom as is now draining color from the broken face mirroring the loss of solid ground. Rest just a while longer knowing that, while reaching out to feel the beginnings of a shift in the winds of time. Your inner vision is the thing that will revel in light, as you turn your heart toward a new beginning.

“No choice is undeniable in its efficacy in having brought you to the truth… that now is a manufacture of life’s un… https://t.co/IO3pJfiEvk

“Your preparation is complete: heart in balance with the zero point between all factors, vision lensed through trus… https://t.co/rSQoMNU7rN