Summary: If you feel limited, perhaps you’re merely obeying the limitations you’ve agreed to take on, or which, in response to the space you’ve felt was yours, you’ve wrought for yourself. No one can redefine those limits for you. Only you can free yourself from your mind. As soon as you do, you move into the space of sovereignty. Dare you? You know that once you do, nothing will be the same. The elemental forces of nature present in their full potential will serve your passage through destiny’s portal. If you have the courage to reach past the edge of what you’ve considered to be your lot, you enter irrevocably into a new reality, in which you are master of your own being, plugged into the source of true power. Live!

Eight of Swords (reversed) — King of Swords — The Magician 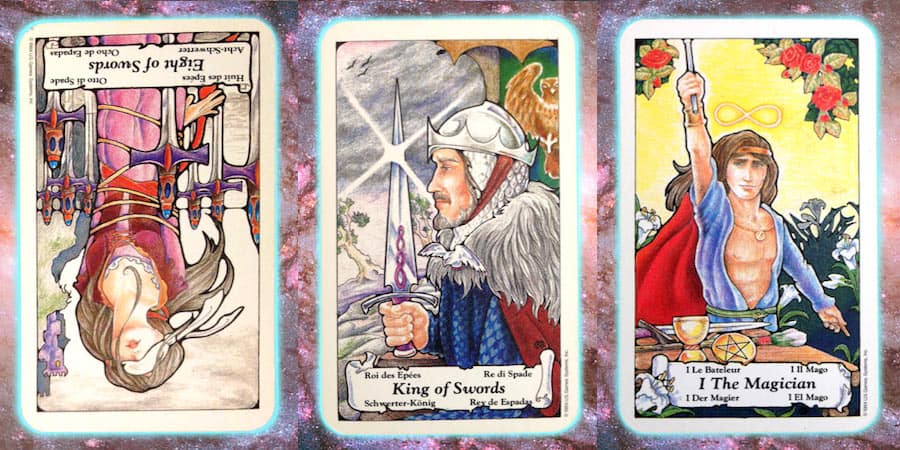 Only you can free yourself from your mind. As soon as you do, you move into the space of sovereignty. Dare you? Once you do, nothing will be the same. #pleiadian #divinity #sovereignty #worldchange Click To Tweet

Do you really think you have it in you to do the thing that needs doing? It’s up to you to do it. It’s also up to you, and you alone, to set yourself to the task. If you can manage it, there’s no telling what you’ll be able to accomplish. If you fall prey to your own mind, however, you face certain catastrophe. That’s it, then, it’s decided. You are the one who is going to have to pull the blindfold from your own eyes. Are your hands otherwise occupied? This is to your detriment, so it’s decided that you will instead have to cave in to the inevitable end. It seems that you’re stuck in a loop from which there is no escape. But from outside perspectives, it’s quite apparent that you are simply stuck in a spot that you’ve demarcated for yourself. It’s a wonder that you haven’t tired of the act. A wonder too, that you haven’t acted already. You might think that anything you do is simply going to benefit someone else’s circumstance. Far be that from the truth, though. No one is depending on you for anything but to get your own self free from the mess you’ve made for yourself. It’s a mental snag, nothing more. No amount of whining is going to have any effect on loosening your bonds. Here, you have to be smart, and here, that means putting yourself to the simple job that’s yours to do. Open your eyes and stop listening to the doom and gloom stories you’ve been entertaining yourself with. It’s time to move. Break the pattern.

You’re being called to step into your native mastery. It’s something that you have always possessed, yet not something you’ve decidedly accepted as yours. With it comes responsibility, after all. With responsibility comes the potential to disappoint, to fail, to err. And to that, we say, so what? Responsibility carries a lot with it besides. So does staying in denial of your potential. You are free to make the decision to hearken to your inner voice that urges you now to step up and act, and you are free to continue to ignore it, or to mishear it. Clarity is as well part of responsibility. If that sounds like something you’re ready for, it might just be time for you to straighten your thoughts out and step into the role your soul has prepared for you. It’s nothing short of a destined moment of growing up, of accepting the mantle that has been prepared for you and you alone. In the final analysis, there is no one you will disappoint that doesn’t ultimately end up in disappointing yourself. That’s it, then, the battle royale, the deciding moment at which you cast aside the illusions you’ve held about yourself, and others, and take on the destiny you were born for. Maybe it isn’t the most glamorous or publicly acclaimed thing. Maybe it’s as simple as stating your truth. However, in a world bereft of truthtelling, your own statement has power to change whole landscapes. Keep your focus trained on that light in your mind, and let your words and actions flow from that point.

MOST OMWARD DIRECTION: The Magician

As soon as you move from the mindset of “woe is me” to that unknown yet vaguely familiar status of sovereign being, you’ll feel the magic flow. What is this mysterious power, if not something natural to you? Tapping into the unknown, taking that decisive step past the limitations of the familiar, unleashes the full potential that had lain dormant, waiting for you to plug in. Where will this lead, should you take this step? There is no way to describe the infinite nature of what lay there, in that beyond. There is neither a mystery about where it is, as paradoxically, you’ve carried it in seed form within you all along. When finally you pierce with your one-pointed mind that featureless face of time’s secrets, the elements within that seed will release the full flower of your potential. At that point, you will have moved from clearly delineated beliefs about what is into the realm of limitless possibility, demarcated only by the innate knowing that you are. Dare you become the I AM that is written in the book of your life? Momentous occasion awaits your arrival. When you get there, there will be no return to what was. Nothing will be left to hide. In taking this moment now before you, in fully entering into what calls you to be, you become at once a master of time and free from its construct. You have the right to be who you have come to this life to be. No one else but you can make the move to be that.

“You drown by surrendering, swim by carrying your own self, dive by aiming, ride a bicycle by balancing, and sit in meditation by totally being aware. Creation employs this and more than you have yet experienced within human form. Nature is as cooperative as belief allows, yet sometimes acts in ways you aren’t able to comprehend in the sane world you inhabit. Nine goes further than where you are, lays you gently in a new reality, and dares you to live.”