Summary: The approach to authenticity in a world of illusion has not been without challenges of ultimate nature. Like it or not, you’re in a new dimension of reality now, one that lay on the other side of the abyss, one that leaches out from you the last dregs of release. Now that you are in this strange new land, your target directly ahead in the no-mans-land between opposing aspects of what is real, you might as well move. In this new territory, there is little that will draw you away from your goal. Simply stay on your target. Those things that rise up as challenge pose little real threat to one established in a quintessential mode of being. Zero in on that.

The Moon — The Chariot — Seven of Rods (reversed) 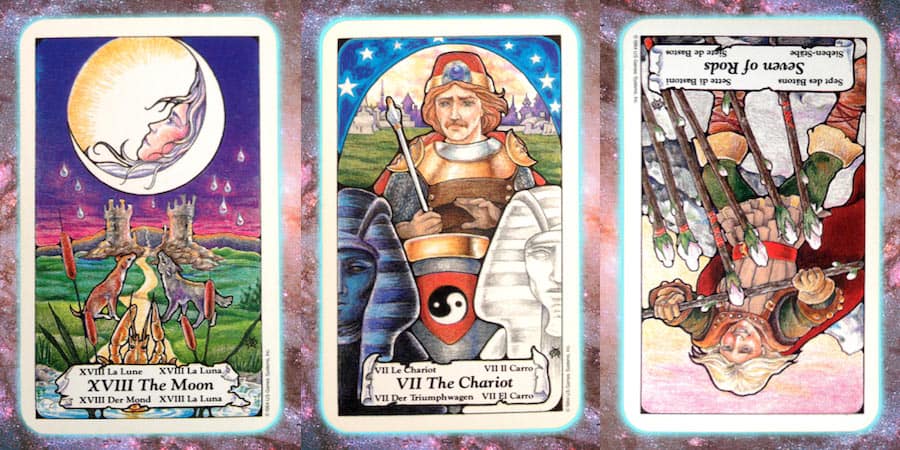 Remember who you are. Apparent challenges pose little real threat to one established in a quintessential mode of being. Zero in on that. #pleiadian #divinity #sovereignty #worldchange Click To Tweet

You’ve dived deep into the waters of your subconscious mind over and over, defying the buoyancy of belief to honor an innate drive for authenticity. At all costs, you’ve determined that this is the way. Your attention is admirable. It has brought you through the depths, not just to them. Will you drown? This is the underlying question. Yes, if you believe this is the only possible scenario. You will drown if you refuse to let go of what pulls you back toward what you have held as the known, the real, the only way. Here is a paradox: You gasp for air and fight the downward pull that drags you into a crushing, pressurized abyss. As you struggle to maintain equilibrium between your inner and outer being, the pull becomes more intense. Fear intensifies. Instinctive habits ingrained from your first days kick into overdrive. Stuck thus, you will drown, slowly, imperceptibly. You will lose yourself and dissolve. But this is not the only way. What if you surrender to the depths? You cannot know, based on what you already hold in your awareness. You must agree to let this go and turn yourself wholeheartedly toward the unknown. Only then will you survive the transformation that is upon you. Dive deep, for you will emerge on the other side. That which you know, what you control, will meet what is yet wild and savage, guiding you on a magnetic trail to your arrival in full selfhood. Let the emotions flow. They are the stuff of the depths. Their release will let you rise in a new atmosphere of being.

With your chosen way ahead of you, released from the distractions of mind, in wisdom you prepare for forward movement. Recognize any trepidation as a natural response to facing what is unfamiliar, alien. You may need to settle into balance, for reaching out to feel what’s in front of you may yield a sensation of otherworldliness at the least. If you face a nothing-feeling kind of space, gently position your awareness within a balance point between forces. Acknowledge what is pushing and what is pulling as mere outpourings of relativistic apprehension of fact and fiction. What history has produced is no less real than what the mind has conjured. Be at peace knowing that the interstitial space between positive and negative is the space of finding equilibrium. Follow what’s ahead and focus your entrainment on the frequency band that wavers ever closer toward release from the pattern of binary force simulations. The closer you get to the core truth of being, the less you will see as space between opposites. That space converges into zero point, the motionless everything space of your natural state. Home. You may waver hither and yon in the here and now. The realm of form is, after all, the realm of enformed motion, living encapsulations of light and sound, frequency frozen in time. It is in the realm of formlessness that the secrets are revealed, where motion is alive outside of time. If nothing else beckons you now, let this be the way.

All things considered, at the point of arrival, what at a distance seemed like insurmountable obstacles may very well turn out to be little more than a pile of toothpicks. You may impale yourself on the picture you held in your mind, but when push comes to shove, you are just as likely to find that imagined offenses pose no mortal threat. In other words, you are more than capable of handling what presents itself to you, in terms of challenge and adversity. Remember, you are moving through the space of oppositional forces as one riding a wave’s crest toward zero. Within the still point of motionless ocean rests all power. It is from this that you arise. Can you feel that power alive within you? There is little to worry about, then, if you embody the full measure of yourself, from your source, from your core being. Remember this. Remember who you are. Reminders will pop up like tiny talons from the ground, teaching you a new dance step, breaking your stride from the patterns you have, along the way, made your own. The essence of who you are will remain, will intensify in its fundamental quality, its is-ness, your unique signature as an utterance of divine word speaking I AM. If you remain true to your path and expand through the narrowing fluctuations between competing polarities, you will find yourself hovering in a timeless space. From here, you will gain your mastery. From here, peace is attained.

“Over millennia, their race had completely, horribly, lovelessly abused planet after planet. When they had ruined their adopted home, they left. Millions of years of such reckless activity had left a wake of lovelessly abused planets behind them and little hope of finding a source of natural plenty ahead. Perhaps there was another way? Yes, there was. Men of greater understanding would show them, if they wanted to learn. Creating a world of pristine abundance was a matter of properly applied thought, love, and zero-point energy. First they had to come to agreement about whether or not they wanted to love themselves despite the carnage their ancestors had wreaked across the bright cosmos. If they could manage to do that, they could do anything, assured the men of greater understanding.”