All righty, so at the risk of venturing into turbulent political waters, I’m just gonna dive in and share a Q&A from one of the social platforms I frequent, regarding this week’s cards. It likely speaks to things many are thinking.

Q: “Reaching out for any input you have Maryann, how do we keep focused while they start a new war that could be so devastating…..”

A: “Remember that the cards also apply to those who are making these decisions, and to all who are in the public eye, just as much as they apply to you or me or any individual reading them. They apply holographically. If you want to apply them to an individual other than yourself, they will also speak. So let’s apply them to Trump, just to be straightforward about getting to the core of your question… 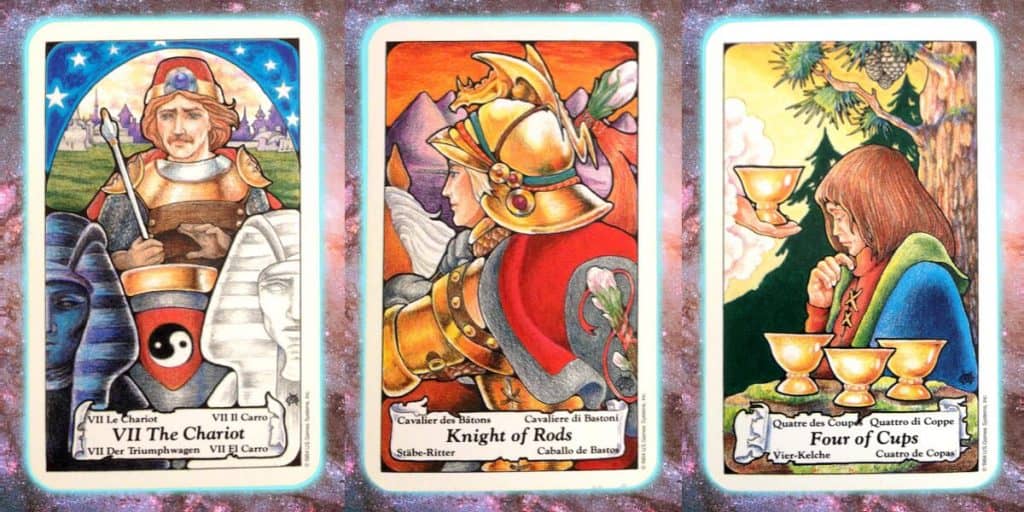 The way I see it, he is carefully yet boldly moving forward through the very sharp polarity that’s in front of him. The polarity could be the deep state vs patriots in one sense, or liberals vs conservatives, etc. Go as broad and far as you like with that. He is connected to higher intelligence, cosmic guidance, and I think he listens to that… not the darker guidance that has been pervasive in the halls of power for eons, but the power of light that is now coming into its time of rising (see the yin-yang). He’s got both power and support in moving boldly to fix what’s been let build into a mess, and the historical basis for going into attack mode now has its roots in very ancient power plays.

For him, in the last card, I see contemplation and reflection on what has been happening, as he has much weighing on his heart from several sources. However, he’s being given something glorious from a divine hand.

I don’t see a long-lasting war ahead. I see a cleanup and rectification of what’s been done before he came into power. I see a coalition backing him without any shady dealing in his intention (well, no shady dealing like past world powers have done to let war become a continuum). I don’t think he’s seeking glory in doing this, nor making a mistake, but I do see, in these cards, that he will likely be taking some time to allow things to heal within, just as the clouds part to reveal something being given from a higher level.”

Had there been other cards in this spread, and someone asked the same question, the answer would be reflected accordingly. However, this is how I read the cards, rather how the Pleiadians read them through me.

The image that’s associated with this post, above (linked to a larger version here), is from a larger image that I drew back in January 2014 (rather, that the Pleiadians drew through me). The full image looks like a stylized map of the eastern Mediterranean. The part pictured here, which I colorized for ease of seeing what I’m talking about here, is where Egypt-Israel-Syria would appear (the small flower at left perching on Alexandria). You can see “BOOM” with the words “Everyone needs 9 now” below.

This is the moment we are in. So many of the writings that have come through the years are coming into maturity right now. I’ll be releasing the final — and largest — segments of the Nine’s Path website this week, which includes a collection of drawings, this one and others. Lots to look through and reflect on.

Please join me there.