Summary: Feeling about done with things as they’ve been? The drama has really been draining, and you’re sure you don’t need it any more. When you have that realization, what comes with it is a sense of moseying along, rather than rushing out the door. Take your time. You’re morphing into a powerful new version of yourself, planting your purpose in fertile ground, recommitting to your higher calling. You’ve got or are gathering what you need. Let be what has to be. Say some magic words and be ready to move into something quite satisfyingly appropriate, and all your own. 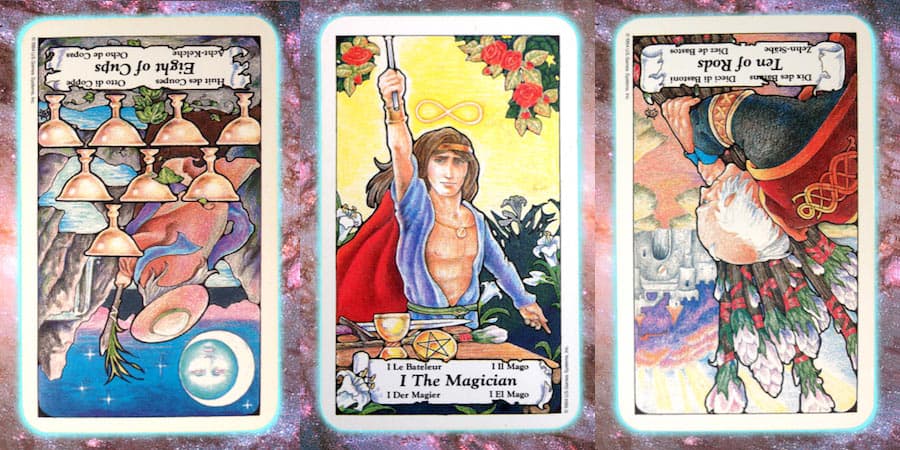 Say some magic words and be ready to move into something quite satisfyingly appropriate, and all your own. Be ready to step into a new you. #pleiadian #tarot #reinventyourself Click To Tweet

What do you really want to do? Something’s tugging at you, but you might want to swat it away for now. There’s no rush to move on into that greener field you sense is waiting. Take a quick scan of your feelings first. You sense some disappointment brewing, festering, sitting in a puddle that you keep dipping your toe into. If you feed it, for sure it will grow. But why feed disappointment when it’s just a passing phase on the way to personal glory? Even if you did make a bold move right now, there’s no guarantee you won’t be looking back at that puddle and feel a twinge of regret. By then, it might be too late to do anything about it. And you can do something about it right now. Out of options? Feeling creatively stifled? Get some perspective. It’s quite likely that the direction you’re heading in in your head is populated with people who have been in your shoes. Before you take another step, if there’s a friendly ear, bend it. Better yet, if you see someone wallowing in a puddle that puts yours to shame, do what you can to help them mop it up. You’ll likely feel a lot better, and your sock won’t keep getting annoyingly wet.

Last week’s majesty crystallizes into magic, pure natural juice that you can put to good use. Whatever’s in front of you now is the raw material with which you can craft a whole new set of tools, and with that, a whole new reality. You have the ability. Simply plug in and go. No one’s better primed or positioned to do what’s given to you to do than you. Open your heart to your own universal becoming, and allow yourself to feel the essence of you coming into fully activated form. The first step, before you make any movements, is to face where you’re heading, and right now you’re heading in the direction of personal power and accountability for your mission. No one’s really counting anything against you, however; everything you’ve undertaken has given you a piece of an alchemical puzzle. As those pieces fall into place, you see a new picture of yourself. This is where you are ready to step into, so put your belief in yourself to the test with all the confidence of knowing that you’ve got it in hand. Transfiguration brings to you everything you’ll need, moving forward. Be ready to step into a new you. You’ll see a new world through those eyes.

Because you’re redrawing the parameters in which you comfortably and effectively operate within, other people might feel somewhat disturbed. Don’t be surprised if you hear the scuffling of those who had walked beside you heading into alternate directions. Just pick up where you are and gather around you what you’re bringing with you. That would be the wisdom and insight you’ve gained, along with the skills to use it in a new, upgraded arena. Chances are, you won’t be moving far before you come across kindred spirits, eager to walk with you toward your goal. The reason is simple: As you divest of what you’re finished with, likewise your path is streamlining. It’s universal. Vectors are converging into new relationship, moving ever toward a singularity of more global understanding. The situation will clarify, and you’ll not be left carrying everything on your own. If what you’ve been dwelling in really isn’t serving your higher purpose, do you really need to drag it out further?

“We are not here to tell you to try harder or ask you to take a survey about which paths work and which are both too demanding and dangerous to enjoy. All that is sampling from Three and keeps you at a lower vibratory range of thought production, which leads to less powerful thinking and creative visualization than you could reach by ignoring it all and choosing and accepting a sample and moving on with it. When it has fulfilled its purpose, it will disappear naturally, and your beliefs will change naturally, too.”