Summary: You’ve reached a point of balance, and already the barren landscape that’s led to a higher perspective is shifting off to one side. You’re firmly set in the surroundings you’ve brought into view, holding all potential and the capacity to initiate new life in transformation of the old. It’s a moment worthy of reflection… and the full power of transformation rests in the reflection of self in other. What miracles the mind can manifest when the focus is zeroed in on the heart! In the space between self and other, everything dissolves in the pure potentiation of light. As you come into understanding of egoless facing of facts in the self-evidence of truth, you may find yourself seeing something unexpected. In the momentary distortion that accompanies full revelation in the mirror of another’s being, offer the treasure, and receive the shine.

The Emperor — Two of Cups — Knight of Pentacles 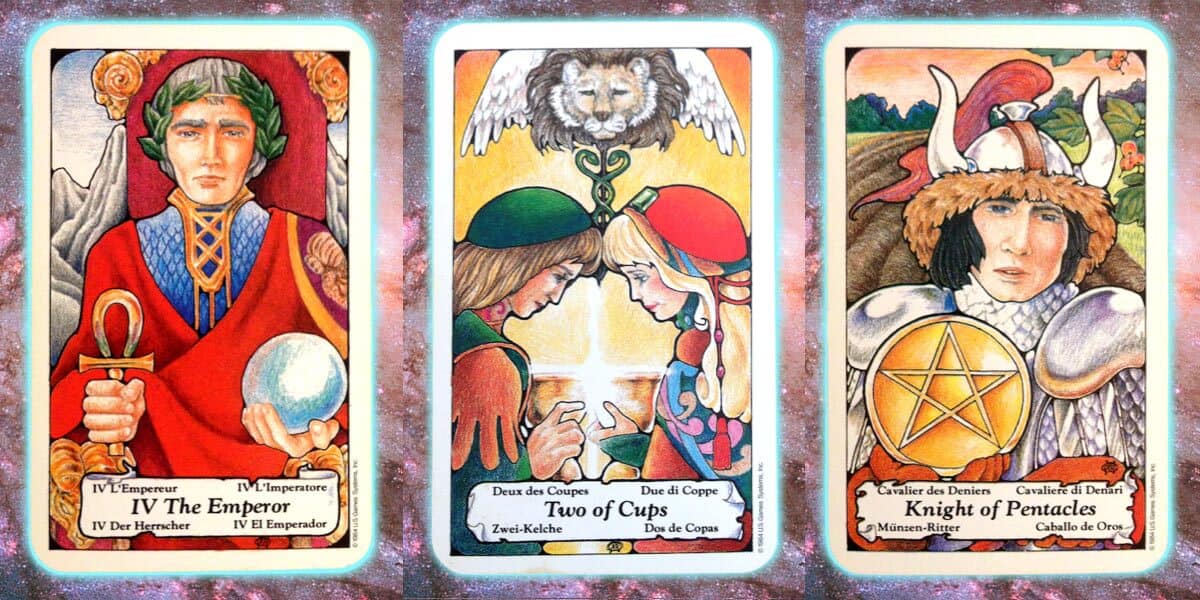 
Have you landed with a “thud” in your current situation? Are you seeing things from a stolidly serene placement with regard to the facts? Do you feel the balance the present moment holds in potential? The energy to change things is yours, and in a sense, the ball is in your court. So is the capability to transform it utterly. You are, right now, seeing play out before you some kind of story line that has no more amusement left to it. You’re trying to remain centered and fair (at least to yourself) but something is dislodging itself from the firm support you’re used to having. Things seem a bit off-kilter. Nevertheless, you have arrived at the pinnacle of a difficult understanding, and are perhaps in territory you didn’t expect to find yourself in. The fact that you are where you are brings a vibrance and promise to what has otherwise been devoid of color and life. Far from a dying landscape shorn to shreds by facts and figures, the life is what you bear, yourself. You are the one who carries the potential of continuation through transformation, through a realization of your own mastery. What you now confront, you’ve created. It’s part of the wholeness of the everything you’ve always wanted. Perhaps you didn’t expect to be surrounded by barrenness. It’s time to get real and see that in front of you is something new waiting to take form. From within your inner knowing, all life will take its cue. Claim what you create and maintain steadiness. Every part of your creation hitherto has formed the substance of your character. Amalgamate.


The space between is where the magic happens. The same is true for physics as it is with the souls in relation to each other. When deception comes face to face with itself, the facts are clear: there is no fooling love, nor hiding from the light it brings into communion. In the undeniablility of is-ness, is transformation made manifest. Life continues. This week, the fertile fields of your imagination open the eyes of another. In a flash of understanding, the concept of unification can be known and felt. The secret in the days ahead is to keep your focus on the heart of another, as you allow your understanding to merge into the unmasking of conceit. Therein, you witness the birth of wisdom, peace, and the divine knowingness of self. Groundedness can trigger psychedelic expansion, when met in the absence of ego. Remember, it is not always you who is the one who makes things change. You carry life and with it the encapsulation of light that exponentially magnifies the substantiation of the heart’s innate power. Some underestimate this power. Some worship it. This week is a time to witness, perhaps to see how little you understand, and to come into direct experience of how much you know.

MOST OMWARD DIRECTION: Knight of Pentacles


How do you feel when the things you see make no sense? At such times, it can seem like the earth itself is swallowing you up. In fact, what’s happening is an expansion of your field of play, of reality itself. If this alarms you, please don’t worry. Perhaps you’re finally facing the facts that haven’t added up lately. Perhaps the image you see in the mirror of self-in-other is distorted. Let it be. In the coming days, you may be called to present the facts as you know them to be, and to bare the material of your mind. Is it time to relinquish the mythos under which you have grown, or maybe outgrown? That, in itself, can challenge you to speechlessness. If that is the case, remain silent and merely allow your manifest reality to show you the way ahead. It may present a puzzle, but you are capable of discerning it, no matter what the reality distortion shows you. If you can remember that some part of what you have allowed to guide you has itself been hiding an illusion, you can find your way more lean and clear than encumbered by ensoldiered means. You’ve worked hard to get where you have found yourself. Is the future going to be as hard as the past? Bring the treasure you’ve cultivated as you greet the uncertainty ahead. You’ve already proven you have the means to survive. Now it’s time to figure out the next phase.

“No choice is undeniable in its efficacy in having brought you to the truth… that now is a manufacture of life’s un… https://t.co/IO3pJfiEvk

“Your preparation is complete: heart in balance with the zero point between all factors, vision lensed through trus… https://t.co/rSQoMNU7rN