Summary: As you feel destiny’s approach having breached the horizon, its light falling on your shoulders, maintain your focus on your own divine task. It is for you to do, and measured awareness of your internal movements is now required. Your transformation hovers, and in a flash arrives, tearing down the edifice of history’s vain construct. You are emerging, embryonic, into a new space and time. Listen within as new life begins its movement. True power dislodges what would otherwise be, in divine time. 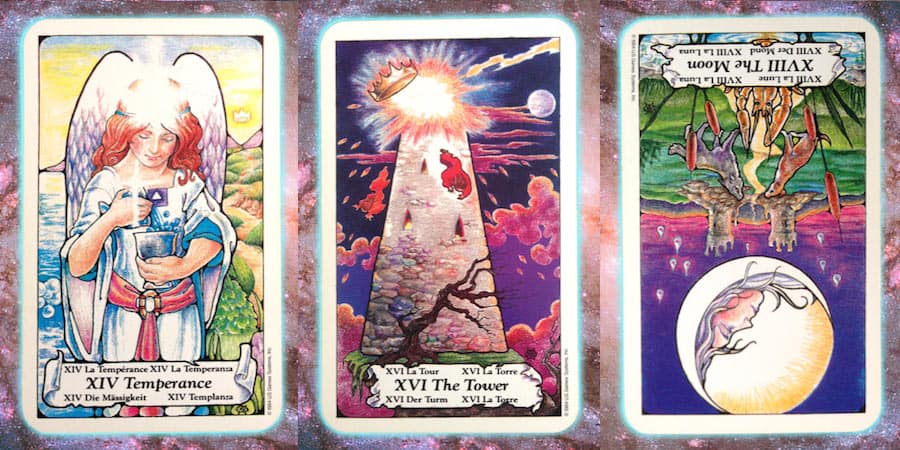 Transformation hovers, and in a flash arrives, tearing down the edifice of history's vain construct. Emerge, embryonic, into a new space and time. #pleiadian #tarot #divinerevelation Click To Tweet

You’ve got this exercise of self-improvement well in hand. In fact, you realize that you might actually be reaching a point of mastery in it, to some extent. To what extent matters not, for in the realm of perfecting alignment with your soul, every little bit counts just as much as big shifts. Even more so, in some way. The faster you move, the less you need to adjust, and this is a time of movement. So much so that really the best thing you can do is to stand still and do more of the inner movement than the outer. If you do anything drastic and demonstrable, let that be a subtle sidestep out of your own way. The soul is requiring your attention be directed to the spiritual plane. Trust that now, for everything you do in the light of that coordinated focus is going to lift you higher and carry you further than any physically, mentally, or emotionally fueled action. The soul is patient, eternally so. You’re asked to remember the timelessness of your being, and to act in accord with that. Whatever you see on the plate in front of you is merely a remnant of time’s manufacture. Within even that morsel is the essence of eternity. Let this be your sustenance, and the key to your successful accommodation of the shift that is currently in gear.

There is no escape from the revelation of destiny. At some point it happens to express divine power, when coordinated activity brings countless pieces of temporality into alignment for the purpose of making a point. The bricks are stacked but by whose design? What began as a logical exercise in sense-making at some point reached heights that narrowed viewpoint and limited expansion within the range of possibility otherwise available. It is not by diabolical hands that its destruction is wrought, nor really by divine decree, but by the internal evolutionary impetus toward liberation of what cannot be contained. Light cannot be compressed without release of its innate energetics. Darkness cannot be created in such a way. Matter can only go so far, as can ideation and planning. At the pinnacle, or near it, where human hands work to create a singularity of trust, it becomes evident that the effort to continue is futile. There’s something greater within the effort that needs to break free. The time for that is ripe, and the light of divine essence is reaching criticality. All that is not in accord with the higher plan that has been encoded in the original all along will be shaken loose, discarded, along with the gathered gloom of renditions of despair. The light that breaks reality open has a greater plan in mind. Tap into that and let the rest fall into oblivion.

MOST OMWARD DIRECTION: 18 The Moon (reversed)

What happens when you release the fear that you’ve been holding, the anxiety and tension regarding what might be? Such a tension can hold you in place, fear can freeze you, anxiety conjure the figures of self-fulfilling prophecies better left alone. Can you face the sudden release from such a tension without losing your mind? In truth, it has been keeping you from the full appreciation of your own innate powers of discernment. Your mental powers unleashed, you find a tumult of indecipherable expression rising into view. Observe. What has been released cannot be put back in the box. Let yourself find a spot of comfort within the eddies and flows of information and feeling. It will sort itself into something comprehensible, but not by force of your mental effort. What sense is to be made of what you witness, both within and without, is not to be made by you alone. The sense is encoded within the activity of what is becoming, and that is in recognizing the truth in love’s grand design despite the sketchy beginnings of setting out a new framework. Expansion requires you to adjust your vision. Open your crown. You’ve grown accustomed to seeing only so far, and beyond that into realities as yet unreal. What happens next is nascent, but it is also already there. It is for you to find. Let your surrender into transformation be in recognition of the presence and permeability of love in all.

“It is not possible, even when life is unlivable, for your soul’s seed to perish. Keep it in your heart well guarded and remember it is there in the face of destruction and cowardice posing as power. It is more powerful and more eternal than any of the hopes the soul-starved soles kicking down the homes of the world’s ennobled humanity ever could imagine. It is yours and cannot be beaten into submission.”

HOW MUCH DO YOU LOVE PLEIADIAN TAROT?

Nine’s Path Pleiadian Tarot messages are posted every Thursday, with a follow-up for keeping on the path posted on Monday. Subscribe for updates.