Summary: You have released to the point of emptiness. Now you find yourself in a new perspective, waiting to enter a technicolor new reality. Hold on, because the time is carrying you and you’re ready to launch, truth in hand. What you’ve carried blessed release. You’ve been wise to parse your words up to now, but at this point, the culmination of the waiting game brings a new set of circumstances for truth to be told. Big changes are on the threshold, as Nemesis dances your way. She’s revealing her light now, and beckons you to see her for who and what she truly is. Light of a new world arrives. Masks fall.

Four of Swords (reversed)  — Knight of Swords — The World 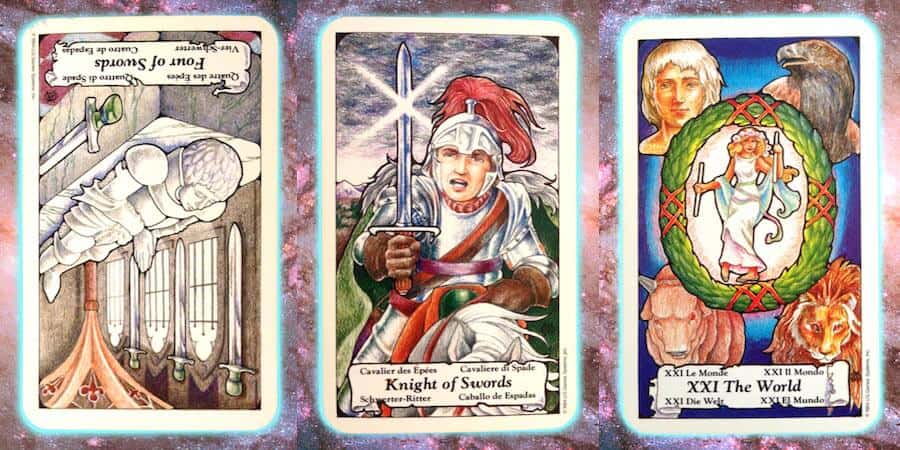 What's ahead is the culmination on a grand scale of everything that's come into play. The cycle comes to a close, the grand drama plays out its final act. #pleiadian #tarot #ninespath Click To Tweet

Are you feeling stressed and done? It’s no wonder. You’ve been pushing through some heavy reality lately. Even if it’s been of the “unseen” kind, there’s been a lot of stuff to work through. Or that’s been working through you. Have you given thought to the possibility that your prayers have been heard and there’s plenty of activity going on behind the scenes? If so, relax and let things come together for you. Have you been setting intentions and wondering why you haven’t seen the fruits of your work to bring your heart and mind into alignment? Relax, because you’re in the final moments of honing your trust in the cosmic system. Have you given up on higher intelligence altogether having any interest in what’s happening here, or simply not existing? Relax. If you don’t need to worry about it anyway, you can amuse yourself by observing and daring reality to prove to you that there’s something more than what meets the eye after all. Whatever your current relationship with the situation, you seem to be hovering at the apex of a culmination of inner activity, the cusp of the unseen becoming real. You’ve been doing what you can to rise above the fray. Now you gather your inner faculties and become ready for a new phase of life to stir you up. If you’ve done your homework, this ought to be good. If you still need to do some last-minute studying, now’s the time.

All along, you’ve done your best to hold your tongue. Sure, there have been plenty of opportunities to let loose with a barrage of I-told-you-so’s, but what’s the point of saying that if the moment hasn’t yet ripened? Wise as your words may be, they do no good falling on deaf ears. However, that’s changing, and you feel it. In fact, you’ve been waiting so long to speak your mind that the sudden jolt forward might have you making some quick adjustments to your footing. It’s not that the foundational basis upon which you have built your argument is slipping, but that it’s finally being allowed to come into sync with rapidly shifting time. There’s been some stagnation, and now there’s movement and culmination of intent. Finally, what’s been clogging up the real momentum you’ve been waiting to experience is getting cleared up. Are you ready to enter into a new scene? Hold on to your whiskers because it’s happening right now. If you can’t perceive a grand shift, it may be because part of the work you’ve done to get ready for your moment in the sun has brought you into alignment. You might not fully appreciate the magnitude of what’s shifting right now, but that’s because you’re part of it. Now’s the time to own what you hold sacred. Shine your light and let it magnify those who are shining theirs. One way or another, there’s going to be a break in the weather.

MOST OMWARD DIRECTION: The World

What’s just ahead is the culmination on a grand scale of everything that’s come into play. The cycle comes to a close and the grand drama plays out its final act. Those in masks are going to be at the foot of the stage, floodlights shining, finally revealing the actors behind the makeup. You might be surprised at what you see, but remember: these are archetypal movements designed to move destiny forward into the coordinates set in a geometry outside of our own sphere of understanding. At least at the surface. In a moment, there will be no surface as you’re used to seeing, but instead a new paradigm bursting forth from the old. Enter your hopes and dreams, your mission update, and a gateway into The Possible. You will see a new world open up before you, as what had been passes away. The guardians remain. What has always been as the foundations of wisdom also remains. You’ll have a sense of irony, perhaps, or of vindication, if you’ve been faithful to your hopes, dreams, and divine purpose. What’s coming is a big deal. It’s going to surpass what had been taken as just-settle-for-what-you’ve-got reality. Nemesis is ready to dance, and approaches, but not as you have ever seen her before. Nemesis comes in pure radiance that casts all shadows not into obscurity, but into the light of a new day. It approaches. Attend to the rite of new beginning.

“Dark sneaks out of the corners and enters the realm of light. Dangerous for both dark and light forces is the frying/grilling depths when the opposing sides meet, yet purifying. Drama extraordinaire! Nemesis makes her appearance, and all comes to a satisfying culmination with a reality-shifting new thought: I am under the light of a new sun, which illuminates the darkness with the same light with which it illuminates me.”

© Maryann Rada, all rights reserved. Repost permitted only with link to original post.

Join a discussion of this and other tarot posts at the Roundtable Forum: http://www.transients.info/roundtable/