Summary: Whether you’re aware of it or not, the work you’ve been doing and the seeds you’ve been planting are starting to show vigorous growth. You’ll be able to build on such things, but for now, keep at it. Turn your attention toward the perfecting work within, ever mindful of the calls of your subconscious and outer realms of communication. The old world, and all the ideas that built it, no longer can sustain you. A new world is breaking through, calling you to let die those symbols you had believed in. A resurrection of knowledge is at hand. Let go and move on, guided by signals arising from contemplation and inner attentiveness.

Read on below for the full message… 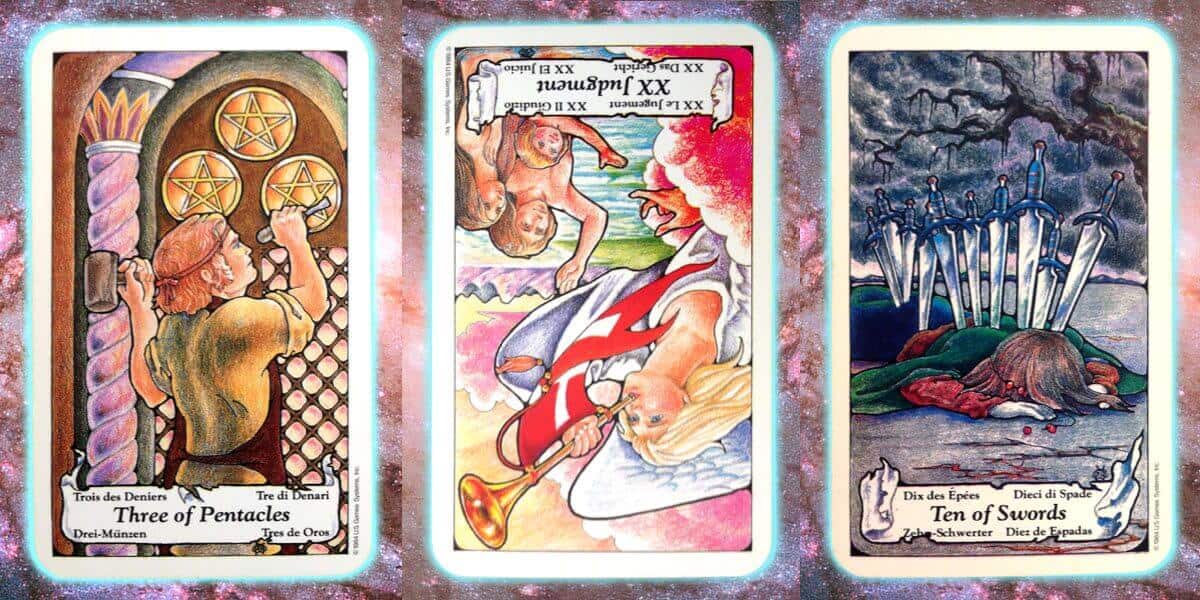 Turn your attention toward a new world ahead; let fall the archetypes of the old world. Pay attention to signals and communications. Let go and move on. #pleiadian #tarot #nine Click To Tweet


You’ve put in a lot of hard work and it’s showing. If you can’t see it yet, keep at it. Trust that, just out of your line of sight, the seeds you’ve planted are growing strong. Not only growing, but making a powerful statement about strength, unity, and potential. You’ve managed to bring together oppositional forces within yourself in a way that works. Threads of various motivational direction now entwine in trust; the result is a foundational core that can bear any weight. The secret is in the dynamics of spin, where the central point is the space of Nine, of zero-point potential, the opening in which the divine can express itself. Everything that you’re endeavoring within now, and the movement you sense within your own evolutionary movement, is aligning in a vortex-like harmonic around that core. It’s all happening. All you need to do right now is keep hammering away at the thing that you’re doing. It’s the avenue for growth. Amazing things will follow.


Are you doubting your fate? Do you question the road you’re on? Even just a little such doubt can pry open a Pandora’s box of self-sabotaging eventualities. Recognize that all such things are manufactured by the mind, and right now you’re well in the process of jettisoning a lot of the accoutrements of limitation. Your best bet now, as the season of a yearly turn on the solstice axis, is to turn your attention inward, toward those things that are rising from your subconscious for rectification, renewal, or release. Pay attention to your dreams and the signals that come from out of nowhere, from the sidelines of your current gameplay. In fact, now is a good time to sit out a round or two of activity and get a feel for what’s going on inside. Your mind is telling you something. Who you are is changing. You have choices to make that will affect your trajectory, and that, dear friend, is going to have an effect on those things you’re creating. A world awaits birth. Before the push begins, gather yourself. Take a deep breath and let it carry with it everything you haven’t yet catalogued or organized as remnants of who you’ve defined yourself to be. Before the time of systems renewal kicks in, your attention is required within.

MOST OMWARD DIRECTION: Ten of Swords


Now you’ve done it. You’ve completely exasperated yourself trying to make sense of all the cross-cutting thoughts that have refused to behave. You’ll soon grow tired of the work that’s required to bring a belief structure square and viable. If you aren’t careful, you could end up cutting yourself trying to find a place to store all those ideas, and to what end? The days ahead are looking turbulent, for sure, and yet, if you get your sights in line with the horizon, you can discern a breaking light. You’ve carried the baggage of blades long enough; trying to make things work is only going to lead to a world of hurt. Turn your attention toward the new world ahead, and let fall the archetype of the old world. It’s doubtful you’ll need those things, those people in whom you had pinioned your hopes. The road ahead will likely be littered with the corpses of cast-off personas. Just ahead lay the lifting of the skies. Leave that part of you that has needed to believe to its fate. You cannot argue with it any longer. The time of knowing is clearing the way. Certainty is upon you. You’ve literally explored a paradigm to death. Take a big step over what you no longer need to believe in, and head toward the breaking day.

“As soon as the magnetics of mind of people as a global entity of thought are altered enough to draw the magnetic pull of alternate realities into a state of integrity, you will experience a radical transformation. Good news, though. It is not death. Reality will change; however, life will continue.”