Summary: A dynamic of the singularity exhibits itself from within you, in this moment. From where you have been held suspended in a situation from which you had little momentum to shift, you now find yourself at a point where you are confronted quite dramatically with a moment between destinies. Go within and feel the cycles and tides as they tell you the secret of your becoming, now. Your new adventure awaits! As you move reborn into the inevitability of a transformed reality, vibrant and fully aware, take a moment to salute the you that has brought you to this point. Feel the warmth of your soul’s smile and be fully engaged with the pure potential as it carries you onward, upward, OMward.

The Hanged Man (reversed) — Two of Swords — The Sun 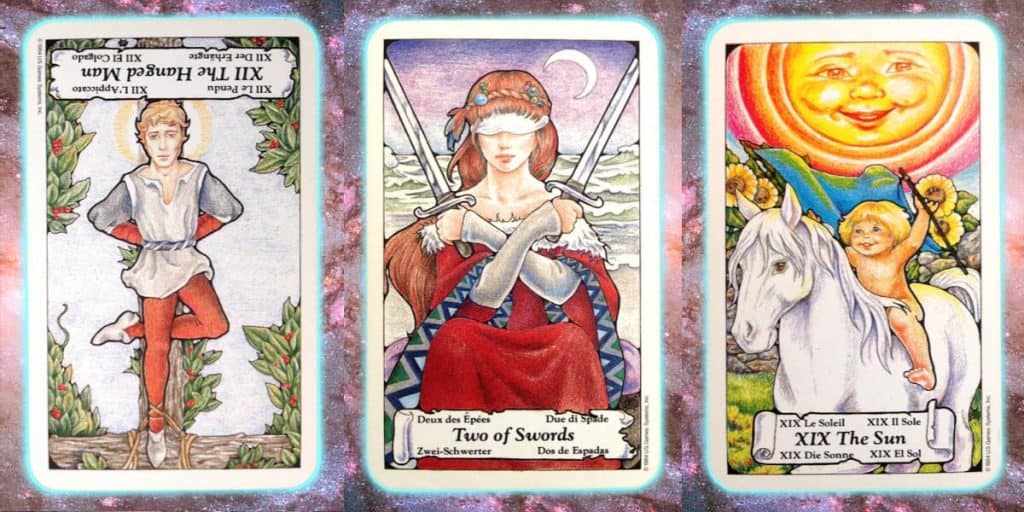 
It may appear to all the world that you have not an idea about how to get yourself out of the topside-down entanglement your toes have been caught in, but wait. The bands that have tied you down in recent periods have loosened themselves enough for you to get free from a trap. You’ve been patient and gone along with the game, and now you are glowing with the truth you have carried, silently, within. You have a thing or two hidden from sight that you may yet use to prove your point, but for now, you are at the point where a decision has to be made, and point yourself in a new direction. Take a clue from the direction you’ve come from and get poised for release. You’ve spent enough time thinking, planning, waiting, and watching. Encapsulate what you have gained and use the dynamic that’s presenting itself to shift your weight from a precarious perch of non-movement into a pirouette that may be unexpected to your onlookers. Watch for the cue. Inhale and be ready. You’ve taken this about as far as you can go with it, and you’re more ready for the change than you might think.


Within yourself, you know you have come to a shifting point. You have gone about as far as you can along one train of thought, while another has been stealthily presenting itself afore. You’ve been true to yourself, and truth, and honor, and necessarily kept your vision abstracted from the illusory shadows as they shift from moon to moon. You have grown and flourished as well as you can expect. In this moment between times, bring balance to the way you have considered yourself to be and the way you know you are becoming. Stay silent in the stillness of that balance point and bring your awareness totally within. It is time to acknowledge the transition, so that you can move into the next moment with poise and readiness. You leave nothing behind in moving ahead, and while you have reached the shoreline at the end of a particular way of being, you have all of the unfolding of possibility waiting, beckoning, whispering secrets of change. The tide of your self-concept has turned. As the cycle completes, give yourself into the realization that another is in fact beginning, and you are at the point of transformation, now.

MOST OMWARD DIRECTION: The Sun


You, as a reflection of the joy of life, have all the light of love illuminating your way forward. The time ahead of you deserves a gracious smile at who you have been, to have led you to this point of rebirth. In the moment of perfection that lay just ahead, let the incipient full cognizance of your transformed self carry you into a richly sun-drenched adventure. To find the most satisfying route, let the vibrance of a new awareness lead you. Know that a shining intelligence has already lit the way. Your soul smiles on your point of departure and from within layered enfoldments of perception, will give you the support you have been waiting to celebrate in full. There’s nothing that can outshine what you’re bringing to bear. Everywhere you look, you are reminded of the success of the life you are entering into. A shift, indeed, and there will be no doubt about it. Prepare for the faded shades of the past to present a technicolor glory to come. Exit point, just ahead. You’re already there.