Summary: To get from ignorance to bliss takes some stern decision-making moments of facing what you know as the truth. It’s the same for everyone. In opening to the bigger picture, you leave behind the tangle of competing bits of information and move into the bigger space of revelation. Maintain attention on your heart. It will lead you to reconciliation with something even better than what has been. 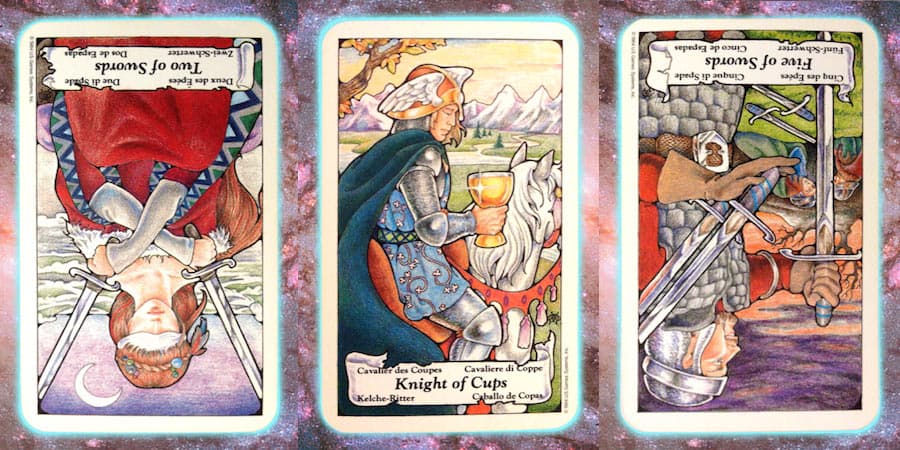 As good as it feels to be right, it feels better to reconcile to higher truths. If you've heard a whispered 'Everything's gonna be all right', trust it. #pleiadian #tarot #truthrevealed Click To Tweet

Just because an idea works for someone doesn’t mean it’s the right idea for you. That being said, it may be that opening up to another way of thinking is what you need right now. You may have found that loyalty to your mind has brought you to grand new vistas, but right now, the view is blocked. Is that because of what you hold in your mind, or is it because someone wants you to see things their way? It feels like a predicament, but in truth it’s a gift. It’s all in how you see it. There’s certainly a lot going on right now. It’s easy to get drawn into the volumes of information burgeoning in the background. You won’t drown if you find your way free of its pull. Careful, now… relinquishing control to either your own habits of mind or the philosophical bent of another person can spell the end of things. Pay attention to what you’re noticing beyond the obvious by allowing your senses to be heightened. There’s a breeze, ever so slight, indicating that anticipate change in perspective is underway. Gently it draws your inner attention outside the boundaries you’ve become settled in. As soon as you’re ready, there’s something to settle inside of yourself, which will move you out of stasis. It may well open a can of worms, but that’s better than allowing what festers unattended to keep you immobile. Face that uncomfortable truth and you might see it’s no big deal after all.

Finally, the puzzle is sorting itself out. It’s mesmerizing to see how the designs blend and fuse, various frequencies of color, sound, and manner sorting within a field of pure and unadulterated truth-bearing consequentiality. As you bear the vessel of your truth-telling heart, your inner arbiter of fact-vs-fiction, what has been swirling as possibility takes form within a boundary of blessing and grace. Higher truths are settling in your mind as if that was the home they’ve always known; you are, yourself, coming out of a period of destiny’s journey into the clarity you always hoped for but seldom dared believe. So many challenges have come into the realm of enhanced intuitive capabilities, as you tended to the business of caring for your self’s own stepwise movement toward whole-beingness. Are you ready to see the picture come into full technicolor expression of your reality now? Prepare yourself. Joy is hovering at the edges of the frame. Flickerings of light are teasing you toward believing, and beyond into knowing. If you’ve heard a whispered “Everything’s gonna be all right”, trust it. You’re moving out of the woods and into the glorious landscape of harmonious happy endings.

As good as it feels to be right, especially when you have fought to be heard, it feels even better to reconcile to higher truths. After all, you may have seen with absolute clarity and precision the design of a certain aspect of a bigger picture, but without the whole aspect, you really don’t have much to offer in the way of resolution. There are many truths at play now, each one based on a particular angle of approach to the whole. While there’s something to be said for pushing forward with a noble cause, there’s wisdom in taking stock of what’s at stake. Sticking to a plan can spell disaster when willful ignorance plays a role in the outcome. Rather than moving ahead with your piece of the big picture as if it were the be-all and end-all, find it in yourself to acquiesce to the fact that you don’t know everything there is to be known. That’s not to say you don’t have a point. You may have a few, and they’re worth holding on to as long as they aim to poke holes in the revelation that’s at hand. How can you help turn a winning situation into a win-win for everyone? It may require taking a step back, but ultimately that will lead to a more satisfying result.

“You ingenious next of kin, do you know how much we have loved you, and for how long? Your sojourn on the plane of Earth has taken you through the harrowing depths of human experience. Now you are ready to end a cycle of enslavement and oppression and enter the realm of open communication with those who have been watching for eons. It is as it has had to be. We are not the ones making the rules. We have to operate within a parameter set by a higher intelligence than our own, and trust the outcome to be the one desired.”

HOW MUCH DO YOU LOVE PLEIADIAN TAROT?