Summary: Now that you’ve gone through an otherworldly shift in relation to the love that binds us all, your commitment to change has firmly rooted itself in the landscape. Clear perception grants a boon to your ability to understand and be understood now. Even if you have no idea what’s behind the things currently part of the conversation, stand firm and know that your voice is needed. Take stock of any details you may have overlooked, and dare to step out of bounds from the familiar. The world is much bigger than what you have ever experienced before. With steady clarity, a brilliant relation in alignment with truth, the power of your mind is becoming your greatest ally. Aim for truth unadorned.

Page of Swords — Two of Rods (reversed) — Queen of Swords 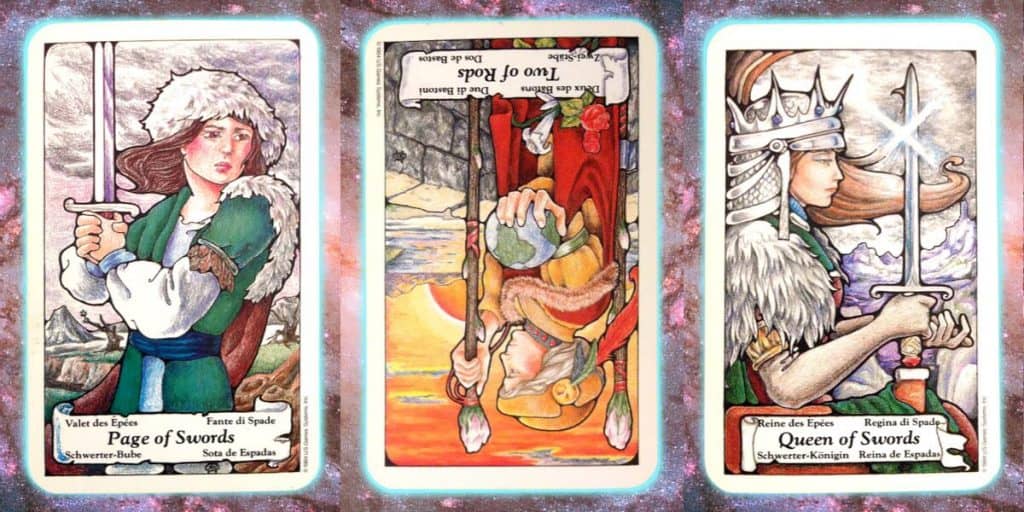 
Ideas abound, as does the energy to talk about them. You’ve already begun to shed what last week’s shift in perception loosened from your 3-D grip on reality. You’ve come through what seems like an initiation into a higher level of understanding and seeing. What’s important now is to harness that energy of a newly-awakened aspect of understanding and engage in conversation and interaction with others. Through engagement, your own grasp of the facts becomes clearer, even if the higher truths behind them remain, for now, hidden in obscurity. Stay on the track you’ve started on, and use the energy unleashed by revelations to slice your way through a tangle of muddled thoughts being presented to you. You’re right to be skeptical of some of what you see. Yet let this not harden your heart when it comes to joining in the fray. There has been enough of that potential of late, and you, newly reawakened to the transformative power of camaraderie, are ready to bring into the conversation what you know. Stripped down to its essence, your inner vision is sharp and very much needed. Heed the call, join the discussion.


You’ve made the commitment to change. Now it’s time to step back, just a bit, and see if you’ve forgotten any little details that might prove useful in making that change happen to the fullest of its extent, for your benefit. The world will wait while you tidy up the loose ends. What you’ve rooted yourself into is proving to be a whole new perception of the world and all that’s possible in it. Don’t be afraid to step out of bounds right now. You’re encouraged to, and while you have the energy packed and ready to go, you’re wise to cast a calm eye on the situation first. Where your soul is asking you to go might be making you pull back a little, into the familiar, the safe, and the known. There are no guarantees, after all, when you’re going into uncharted territory. Remember: You’re carving out, with others, a new map. New neural pathways are establishing themselves, and you stand at the gateway of immense and powerful change. What you choose now, in contemplation of your path, affects more than just your little world. Reflect on that.

MOST OMWARD DIRECTION: Queen of Swords


There’s no stopping you now. You have all your ducks in a row and you know whereof you speak. Nothing can distract you from loosening your tongue and readying the world to hear what it is that you have to say. And well it is for those who hear, for your wisdom has come to razor-sharpness. Your vision, your perception, likewise clear, extends far ahead into the world yet to come. Things are finally looking like they’re on the upswing, as far as regards real communication. You know what’s in the offing, and the future calls to you to enter it now through your expansive mind. Go ahead, for that’s exactly what’s needed now. You’ll be given precisely what you need to know, to deliver in the here and now. Moving forward, it’s your clarity of mind that leads you to the promised land… the better world that you’ve been intent on manifesting. Be so clear, in fact, that nothing surprises you, that you have no expectations, that you’re steady in moving toward the change you’ve committed to. Truth, unadorned, without baggage, firmly grounded, is your greatest ally. Don’t be swayed by unnecessary adornment of it. Brilliance in simplicity is the highest rank of nobility.

“The mover of perception, the weaver of new worlds is Nine. Nemesis is Nine’s agent of change, and love is its sole operational goal and certainty of self-expression. Nine may, in its workings, nearly drive you to the edge of sanity, but it will not push you over. That decision is yours alone. Rather, Nine will show you the nest of vipers you have been mistaking for a bed of roses. It will put your eyes on a few new pieces of information that may not feel quite right and show you a door to a new understanding. New understandings lead to new realities and consequently to the edge of what you had always accepted as sane and solid. It is the thread spun by the spindle of Nine that necessitates your movement from one reality to another. It is Nine which carries your consciousness on the resonance frequency that modulates your reality from bodily wisdom to cosmic prayer of beingness.”