Summary: The cycle just completed brought you the satisfaction of greater authenticity, empowered self-expression, and inner mastery of some core way of thinking. Now is a time of transition, where what was is being swept away to make way for what’s coming on the scene. Though things may seem upside-down in your immediate circumstances, know that this is blessed change. It’s a time for letting go of past modalities of thought altogether, and embracing a new relationship with yourself and your world. Move without the baggage of the past into the clearing space ahead of you. You’re about to make a big entrance into a bold new reality, one overflowing with creative ambition and a few surprises. Be open and ready for the change that’s about to rewrite your life! 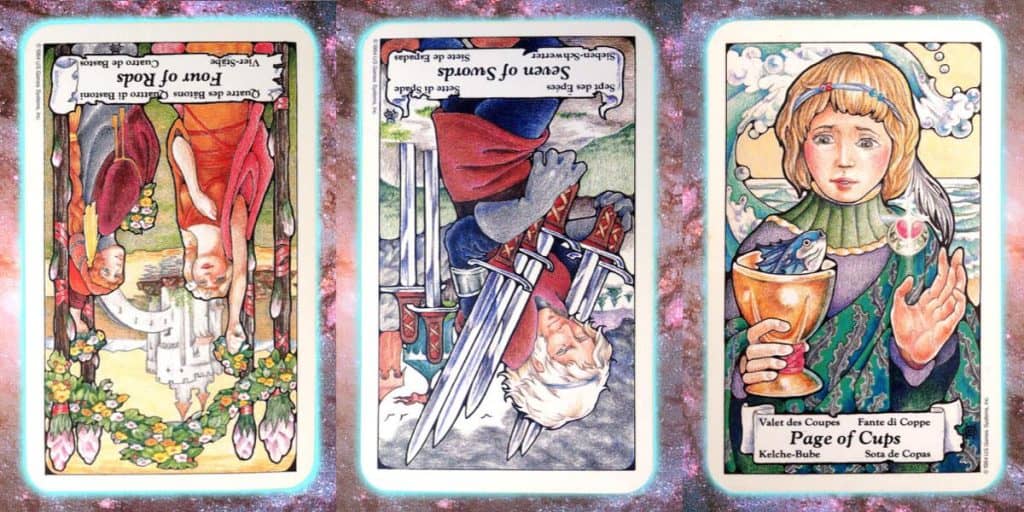 A moment of destiny is about to tell you some secrets and bring your consciousness crashing into a bold new reality! #pleiadian #tarot #nine Click To Tweet


Last week completed a cycle of understanding and brought you to a point of mastery in holding on to your truth and carrying it proudly. You have come to know more clearly who you are. Now, it’s all about transition. Things are in a slight period of disarray, as what was so nicely arranged now comes into a phase of being out of phase. Suddenly, you have to master a new kind of communication, not just with others, but with regard to yourself. How you relate to yourself right now is the material of study; luckily, you’ll likely find others in the same situation. You’re in a space that’s newly swept clean, and you have all the energetic material to start manifesting something worth celebrating, in the long run. Right now, allow things to be as they are. Roll with it. Something new and wonderful is invisibly winding itself into the particulate arrangement that will result in cause for joy. Your surroundings, if they’re in disarray, are in a state of flux. Remember, this is a temporary situation. What you’re transitioning through right now is far from earth-shattering, though it may leave you feeling topsy-turvy. It’s a healthy chaos.


Have you noticed that things just don’t get to you the same way they used to? People might still get under your skin, but you take it lightly, and with loving deference. Do you really feel like arguing, anyway? There’s so much to look forward to now. The universal elements are conspiring to make this a time of just walking away from past issues. Your attitude adjustment is, in fact, clearing the air without needing to get into any kind of messy interactions. A breath of fresh air is just what you need, and that’s what this moment in time is giving you. You’ve said what you had to say, you’ve gathered all the new information you were after, even if it led to a surprise or two along the way. If you’re feeling a bit smug about how well you’ve navigated the past cycle of evolutionary growth, that’s well and good. After all, in finding your way to this balance-point tipped toward transition, you have actually made some useful discoveries. Mostly, those are about yourself, no matter how you came about them. Now, you’re ready to move on, footloose and fancy-free. No baggage here. If you still feel you’re getting tugged at by old habits and hurts, take this magical moment in time to redefine it as a tickle rather than a trouble. You really can walk away now, and that means walking toward something else. Let old resentments fall away.

MOST OMWARD DIRECTION: Page of Cups


What a happy synchronicity you’re encountering! You’re about to find yourself swept away by something new, exciting, and satisfyingly creative. Be open now to whatever comes up, and receive it as a messenger from the depths of your soul. You’ve met a moment of destiny and it’s about to tell you some secrets. In fact, it’s about to bring your entire consciousness crashing into a bold new reality! Oh dear, what kind of transition is this? The kind you have prepared yourself for, quite simply. Everything you’ve just experienced has led to this point where what was is about to become what you had never imagined could be. Can you know what that’s going to be like? Not until you cross the transition point and experience it. It’s time to be ready for anything, to trust, and to be open. You have a guiding light and some help at hand. Embrace the moment that’s about to change your world. Above all, allow yourself the freedom and exuberance to express yourself with childlike authenticity. It’s the best way to let your dreams come true.

“You and we are of the same origin called Life, this is true, but in our form as Pleiadian and your form as Earth human, you do not have much of memory available to you. This is set to change with the opening of your envelope, planetarily, in the coming transition of world power and eventual opening of human opportunity to life in the manner you wish, free from the rule of lawlessness. It has been the norm on Earth for many, many generations, but it is not endless in its reign. You will be the generation to witness a complete transition of world-mongering political machinations into the true love that is the birthright of the people who inhabit Earth in conscious harmony with the planet herself. It is a time long anticipated not only for the joy that freedom from perceptual enslavement brings, but also for the boundless brightness shining from within the heart of humankind on Earth. ”