Summary: Gaining balance in the midst of turmoil has never been without some inner revelations about one’s own natural magic. Right now, while the world is experiencing wave after wave of tumultuous change, you’ve found a point of balance before you. Stay with it, and rest from the work you’ve done, knowing that the transformation is in process and your place within the world of wisdom is secure. Now is a time of measuring how you use your energies, your words, and your presence. Look into the depths and be willing to cut through the screen that ego has conscientiously fashioned. On the other side of it lay the truth: the truth you seek, and the truth about yourself. 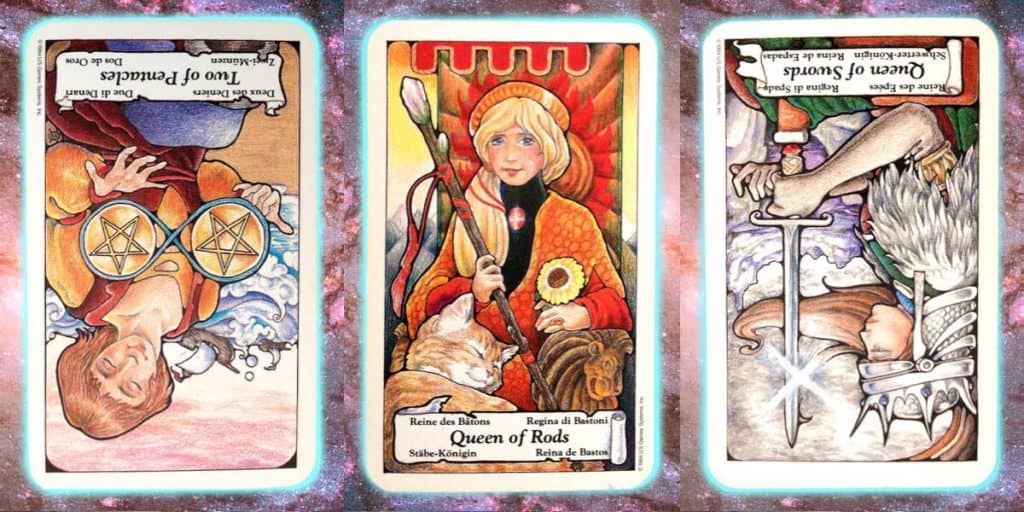 Work with what you've found... while the world's mad rush soaks into the shifting sands of time. #pleiadian #tarot #nine Click To Tweet


You may be feeling more content than you have been recently, having gained some sense of solidity in your immediate territory. In the act of turning from what had become disillusioning, dissatisfying, or dystopic, you sense that you’re finally within reach of making sense of things. However, you’re not on solid ground yet, and the grasp you have on your immediate concerns may be tenuous at best. Let this not disturb you. Be aware of the wisdom in finding balance. Letting what you have thus far attained in your endeavors slip from a co-orbital relationship could well lead to being buffeted by a cacophony of energies and arguments that really don’t have a direct bearing on your mission. Work with what you’ve found. Let all that bustle itself out in the background while you turn your essential point of absorption toward that elusive zero-point of balance. As you do, a sense of the magical will reveal itself, and with it, a space of contentment that is all yours. Own that and enjoy it, while the world’s mad rush soaks into the shifting sands of time.


What you were searching for, you’ve found. In looking inward and trusting what your intuition revealed to you, you have gained the grace and poise of self-control. Let that part of you that has done so much work take a break; rest in the contentment of having made it through a major shift. Meanwhile, an evolutionary seed is taking form. The inner strength you’ve cultivated moves you into what may come with utter fearlessness, borne of a clear and purified heart. All that has not endured the crucible of self-examination has morphed into pure energy in form: you, now, in sovereign control of your will and power. What shall you do with it? This question will answer itself. For now, there is a call to serve those who have been seeking the guiding light of truth. You are ready now to shine; that cannot be denied. Hide nothing now as there is nothing to conceal, yet in wisdom measure out your words and the energies and understandings behind them. Let your actions be gentle, for your presence is intense. There is too much at stake now to unleash everything. Within the fires of transformation, you are emerging into your ascendancy. Wisdom is your greatest ally and tool. Get it?


It appears you’ve managed to wrestle your way out of a tangle of ideas, opinions, and dogmas. On the way you’ve grasped the singular train of thought that leads to the prize you seek: truth absolute. Truth in itself is but a doorway to all that as yet remains hidden. The important thing right now is to see that you’ve used your mind well to crowbar yourself out of a sticky situation. What remains is to confront what your current state of mind reflects to you. This is your next task, and to succeed will require mastering those subtle (and not-so-subtle) tricks of the mind and, dare we say, ego. While the truth is without a doubt in your hand, you have yet to gain total command of its apparent sharp edge. To avoid the risk of cutting yourself in the process of settling in alignment with its essential power, take some time to reflect on where it’s directing your thoughts. Are you ready to contend with the less appealing aspects of your own nature? It is in digging that you gain the treasure. Cut through the clouded, muddled concepts you hold about yourself and be willing — and prepared — to witness a grand inner transformation. Be nice, if you can, but above all be brutally honest… with yourself.